I am not going to do this post justice, but I want to try. Sunday my grandma passed away after a short battle with cancer. It was a great loss for our family. My grandma has been a centerpiece in my life whom I often took for granted. She always knew all the gossip family news.  If you ever needed to know information about someone in the family, it was almost as easy to go to Grandma for information than it was to go the source.  But Grandma could keep a secret too!  Over the years, I was always amazed at the new things I learned about Grandma.  On one of my more recent visits, I learned that my grandpa bought her a Mustang convertible when my mom, aunts, and uncles were teenagers!

Things I learned from my grandma:
--My love of puzzles (jigsaw, crosswords, and word searches)
--My love of books and going to the library to get them
--My love of the written letter
--I'd like to think that I got my sense of humor from Grandma, but I'm not sure!
--Love of the indoors :)  Apparently, according to recent discussions with other family members, Grandma did not really enjoy the great outdoors!
--How to wake up early (I don't think I really learned this from Grandma, but I definitely inherited it, even if I didn't want to!)

This picture was taken a few weeks ago on a rare outing for Grandma to my mom, brother, and sister-in-law's house.  Grandma did not like to have her picture taken, so we may have snuck some pictures.  This one was my absolute favorite! 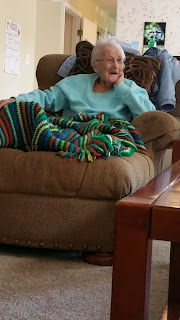 Grandma went into the hospital two weeks ago and we were told that the tumor in her intestines had grown.  We knew this was a turning point for the family.  I traveled up to the suburbs the last two weeks to spend time with her.  They were five very good days for her.  I was so thankful for that time, even though I wished for more.  Even in her last days, she was telling stories and saying things to make us laugh.  And caring about others.  Two weeks ago, she was asking me about my church, and my half-siblings.  Some of the time she seemed so confused and then she would ask questions about things that I would not expect her to remember.  She cared so much about each of us, even if she sometimes had a weird way of showing it.  One of her favorite exasperated phrases was, "You people!" usually said often when there was a family gathering.  We started referring to all of us hanging out at the house the past couple of weeks as a party, because she was never alone.  Erin told me the other day that she had said to Grandma, "I'll see you tomorrow for the party."  And Grandma said, "It would be a real party if everyone left!"  Haha--such a Grandma thing to say.

Saturday night, the last conversation we had with her was when she was going to bed.  Nate and Erin had just helped get her to her room, which often caused her a lot of pain.  As we were saying goodbye, Nate told her that he would see her tomorrow for the party.  She asked him what she should make :).  He told her that she didn't need to make anything, she just needed to supply the drugs.  She said, "Oh, I have plenty of those!"  When I leaned in to say goodbye she asked if I was going home, because she knew I always had to travel from Peoria and back.  I told her no, I would see her for the party tomorrow, too and then leave tomorrow to go home.  Little did we know that she would take a turn for the worst in the middle of the night.  My mom got a call in the morning and we all went to the house.  Grandma was unconscious all morning but we were able to take turns sitting with her and holding her hand.  It was good to be with family.  She passed away at 11:15.  She will be so missed.

My aunt had this picture in one of her albums.  Grandma is holding me at my cousin's second birthday.  I am a little over one. 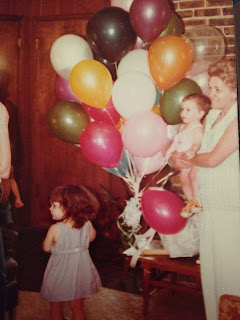 Things I remember about grandma from when I was younger:
--Sorting huge jars of pennies on her floor
--Doing puzzles with her
--She would make "sand" boxes out of cornmeal (I think)
--I only liked carrots the way she cut them
--Her house was one of my favorite places to be

My cousin Megan took this picture on Friday.  Such a precious thing: 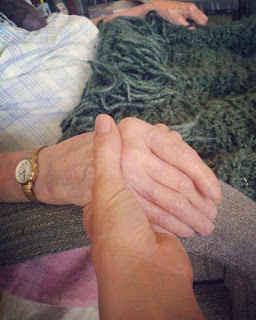 Grief is such a funny thing.  Even on Sunday, we laughed and cried as we shared memories.  This week has been a bit of a roller coaster.  My supervisor has been amazing and almost forced me to go home on Monday.  My clients have cooperated by cancelling some appointments so I can work short days.  I have been pretty lethargic in the mornings, randomly teary during the day, at times in denial that she is gone.  Most of the family will head to Missouri this weekend, where my grandma was from.  There will be a small service on Sunday and her remains will be buried there.  We will have a family get together in July.  We will learn to function as a family without her at the center.  It will be hard, but it is expected.  We should take a vote on who will be the bearer of all family news :).

Here is the obituary that some of the family wrote.  Even from this, I learned something new.  I never knew she had the nickname of Possum!

Pauline (Denton) Koszycki, a long-time resident of the Chicagoland area, died Sunday the 5th of June 2016 at her home in Roselle, Illinois surrounded by her children and grandchildren.Born the 13th of November 1927 in Mountain View, Missouri, she attended a women's college and attained a teaching certificate.  Pauline first taught in a single room school in Howell County for a few years.  She subsequently moved to the Southside of Chicago with her sister Gen and a friend to seek more lucrative employment opportunities.  There, she worked in a secretarial pool for an insurance company.  A blind date with Eugene C. Koszycki made obvious the path her life was to take.  Pauline and Eugene wed in 1952.  Six children, eight grandchildren and two great grandchildren ensued.  While raising her children she taught grade school at Saint Walter’s Catholic School and helped Eugene forge a family drapery business.  She had a hand in raising every grandchild, and unconditionally loved and protected her entire family.Curling up with her books earned Pauline the childhood nickname of Possum.  She remained an avid reader throughout life, and enjoyed solving puzzles, writing letters, following the news, and keeping politically current.  She was a conduit of family information while maintaining a rare ability to keep a secret.  Through her very last day, Pauline approached life with a strong will and contagious sense of humor.Preceded in death by her parents John Gordon and Dora Marie (Reese) Denton; her siblings Elmer Denton, Genevieve Stark, John Denton, Max Denton, Leahman Denton, Cecil Denton, and James Denton; her husband Eugene Koszycki and her granddaughter Nicole Forsberg.Survived by her sisters Thelma Williams (Bill) and Bettie Baser (Don); her children Margaret Haufe (Walter), Carl Koszycki (Lydia), Cynthia Forsberg, Patricia Koszycki, Teresa Luketin, and Paul Koszycki; her grandchildren Christopher Forsberg (Ann), Michele Delgado (Sergio), Teresa Forsberg, Megan Griffin (Dan), Jake Luketin, Nate Luketin (Erin), and Dan Haufe; her great-grandchildren John Forsberg and Michael Forsberg.She will be laid to rest at Old Mountain View City Cemetery on Sunday, the 12th of June.  There will be a memorial gathering at her Roselle residence on Saturday the 9th of July.  In lieu of flowers please make donations to your preferred charity.


She will be so missed.   But she was so loved.  And we were so loved by her.