If my getting a cat came as a surprise to anyone, you have to understand the nature of decisions in my mind,  I have been debating a cat since I moved into my condo in October.  But there is not a good place to keep a litter box and so I was stumped.  Everyone said if I really wanted a cat, I would figure it out.  And I began to think they were right.  I guess I didn't really want a cat.  But this is how I tend to do things.  I deliberate for months on a decision, and then I impulsively make the decision.  Sometime the week before I got Quincy, I started thinking about it more seriously.  I got on one of the local shelter's websites to look at options.  I talked incessantly about it with my coworkers (the poor people)  I showed them pictures of my top four picks, one of which was a kitten.  But the shelter stated that you cannot request a specific kitten.  It is first come first serve.  On Monday evening I impulsively filled out my application, putting those four picks including the kitten.  On Tuesday I got a call that my application was approved and one of the adult cats plus the kitten were available but I needed to come in within 24 hours.  I couldn't get there until after work on Wednesday.  One of my coworkers told me she would bring me a cat carrier.  I went right after work, and there was Brantley, the cutest, tiniest ball of fluff.  And his equally cute gray and white sister, all cuddled together in this hammock (we won't talk about how I debated coming home with two kittens!).  It was a pretty seamless process and I was out of that shelter in less than an hour, with the kitten! 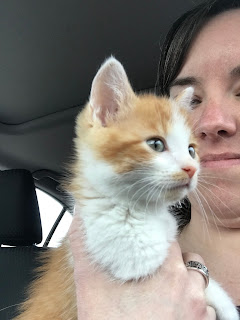 Then I had the excruciating decision of naming him.  I had started thinking of names earlier in the week, just in case.  Top names at the beginning were Baxter, Sully, Tanner, Ryder, and Quinn.  The day I got him, the names that stuck in my mind were Spencer and Quincy.  But I could not decide!  Thursday after work I had to call the vet to make my first appointment and they needed a name.  I told them that I was still trying to decide but that right now it is Quincy.  Then, through the shelter, I also got 30 days of free pet insurance.  When I called to set it up, they also needed a name.  So, Quincy he became.  I think I was always leaning toward that name but I was being swayed by the crowd, because most people liked Spencer better.  I just kept thinking that it was a good thing I haven't had any children.  How do you ever decide?!  It's such a permanent decision! 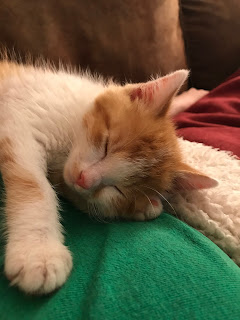 As most of you have seen on Facebook, Quincy likes to sleep right at my neck.  I don't mind it much, except when I have other things to do because he will follow me around and meow incessantly until I finally just lay down with him and watch an hour of TV while he naps.  I know, I'm creating bad habits, but he really is cute.  I'm at my kitchen table while typing this and he is sleeping in my lap, but he kept trying to crawl up to my neck with those sharp little claws! 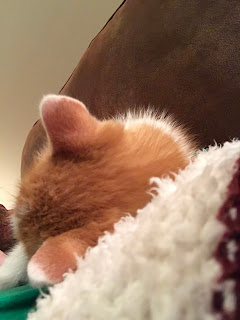 I love the white tips on his ears! 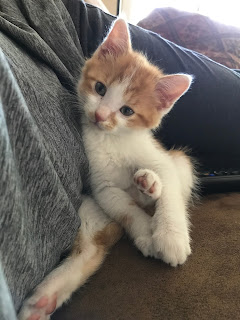 That cute little orange marking on his nose is what I loved in his picture the first time I saw him.

We're adjusting.  Apparently, my condo is not very kitten proof, and he can only get to the lowest level of things so far.  He's about a two pound ball of fluff.  He purrs the whole time he's asleep, unless he falls into a deep sleep and then he stops purring.  He has this mouse on a stick that he loves to play with and carry around in his mouth.  So far, I've been keeping him in the spare room when I leave or at night.  I want him to know early on that he is not going to sleep in my room.  No pets in my bed.  People think I'll change my mind on this, but it's a pretty adamant rule that I have.  I'm too light of a sleeper.

It was nice timing to get him.  Things have been a little calmer at work, so I've been able to get off earlier and be home at night with him and then we had a three day weekend, and I'm off Thursday and Friday for my sister's wedding on Saturday.  We are off to the vet first thing Thursday morning because the shelter required a visit within the first week.

I'm sure there will be plenty more cat posts to come.  Such as his sleeping habits.  I have so many cute, sleeping pictures it is not even funny!  Yesterday I wasn't feeling well, so we laid on the couch together most of the day.  And I documented every nap in pictures!
Posted by Teresa at 10:11:00 AM