A day for Ramblings...

I was driving to a wedding reception yesterday, listening to the radio. It cracks me up when songs play that speak "directly" to your life in that moment (sort of). For instance, when I was driving to my high school graduation many moons ago, I heard the song "It's the End of the World as You Know It." Isn't that so fitting? I thought it was and it's something I've remembered for si(cough, cough)n years now. Anyway, back to yesterday and driving to the wedding reception. I heard the new Hunter Hayes/Jason Mraz song "Everybody's Got Somebody But Me." This is not me being all "woe is me." Honestly, I thought it was hilarious. Emily was in the car with me and we just laughed and rolled our eyes. Music is such an interesting phenomenon. And now some randomness in pictures: 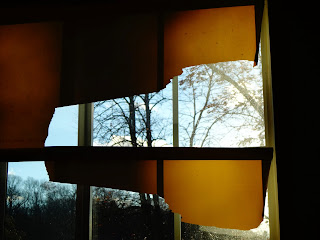 Last night I went to close my shades and it popped out of my hand and went spinning out of control.  And apparently ripped.  Sigh.  Luckily, the apartment supplies blinds now.  These were installed by Emily's former roommate before I moved in.  Back then, the apartment did not supply any window coverings. 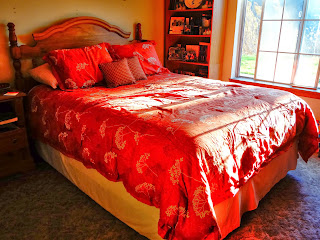 And I changed out my comforter today.  I never got around to doing this last year.  So it has been two falls since I have seen this comforter.  It was kind of fun. :)  See, I do like change.

And now I shall go clean my bathroom.  Because that is what I was really supposed to be doing when I decided to take a few pictures...
Posted by Teresa at 3:59:00 PM