Happy Valentine's Day to ME!!! AKA: I bought a car

Every time I say, "I bought a car," I think of the movie "We Bought a Zoo."  I literally finish "I bought a car" with "we bought a zoo" in my head every time.  I'm weird.  Just give me this one and we can move on.

So, here's a little story about me and my new car.  I'd give you his/her fancy new name, except I've never been much into naming cars.  So you can call the car whatever you want! :) 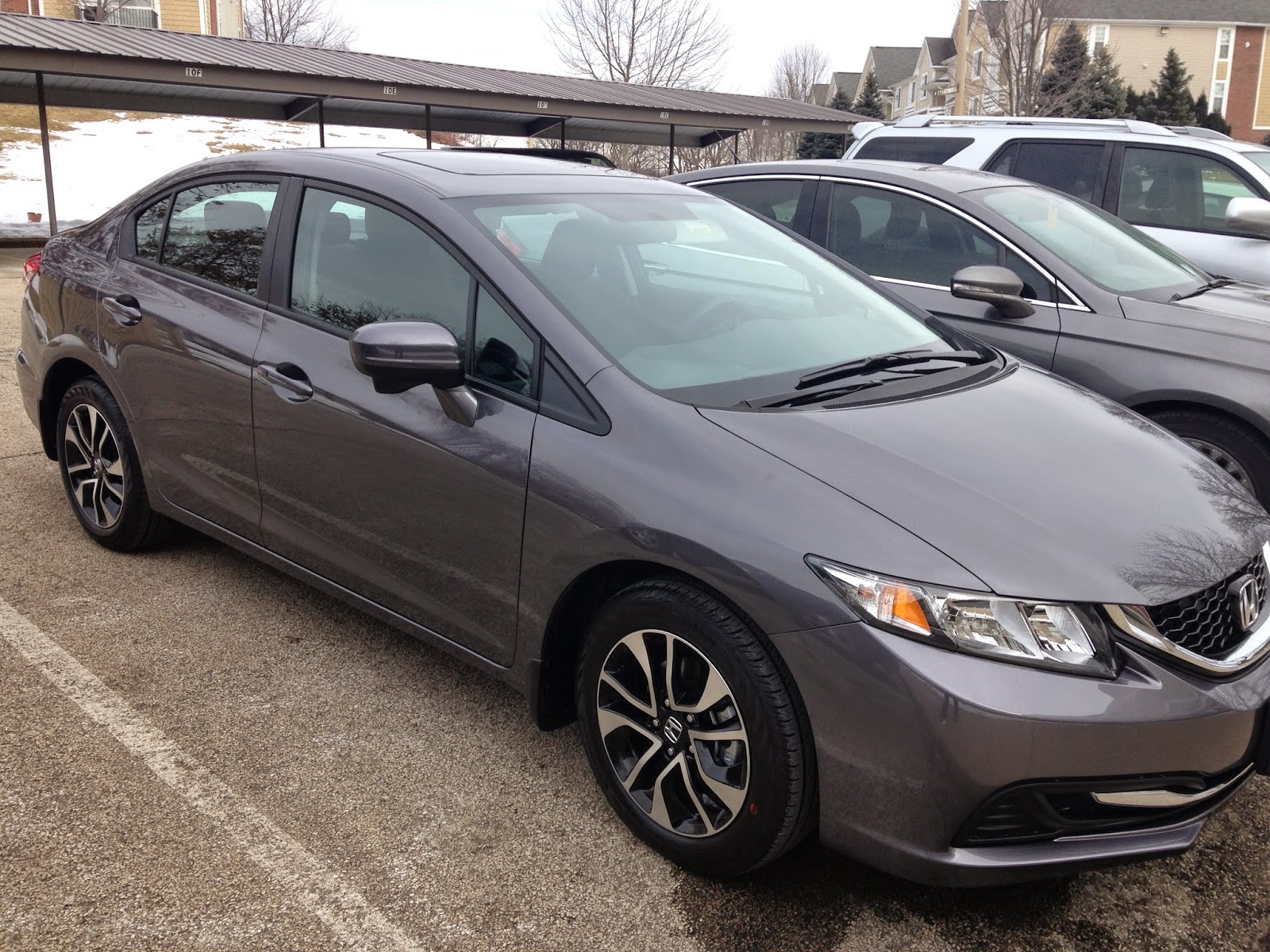 I have been fortunate enough to have a job that pays me for the miles I drive.  In 2006 when I got that job, I decided I had never really felt as if my Ford Contour was all that reliable, so I didn't want to keep driving it into the neighborhoods I often frequent in my job.  Last day of the year 2006, I dragged Amy along with me (and by dragging I mean that she was really excited to go.  Apparently she likes car shopping) to go car shopping.  I'd never bought a new car before, but the timing was right for that to happen. So, I drove off the lot in my brand new 2007 Civic Hybrid.  I'd love to say that I loved everything about the hybrid, especially the gas mileage.  But I think the gas mileage stopped working in my favor several years ago.  For the past year, I have been successfully avoiding the fact that my check engine light regularly comes on and it's because the hybrid battery was dying.  Then, about two weeks ago, my car was doing funny things and the few times I told people about it, they said it had something to do with the transmission.  My goal was to last another year in this car because I had been saving to pay outright for a car.  But that was not to be.  So, I decided to venture to the dealership on my own to buy a car.  There were people who would have gone with me, but for some reason, I stubbornly wanted to do it on my own.  The good news is, when you go along, if you leave satisfied, you don't really know if you got taken advantage of! :)  I had done some research and had decided that I most likely just wanted another Civic, but not a hybrid again.  So, 3ish hours after I had walked in, I came out with the keys to a brand new 2015 Civic in the color I wanted, with an auto-dimming mirror thrown in.

Here is the sequence of pictures I took with my key.  I couldn't decide what look I was going for: 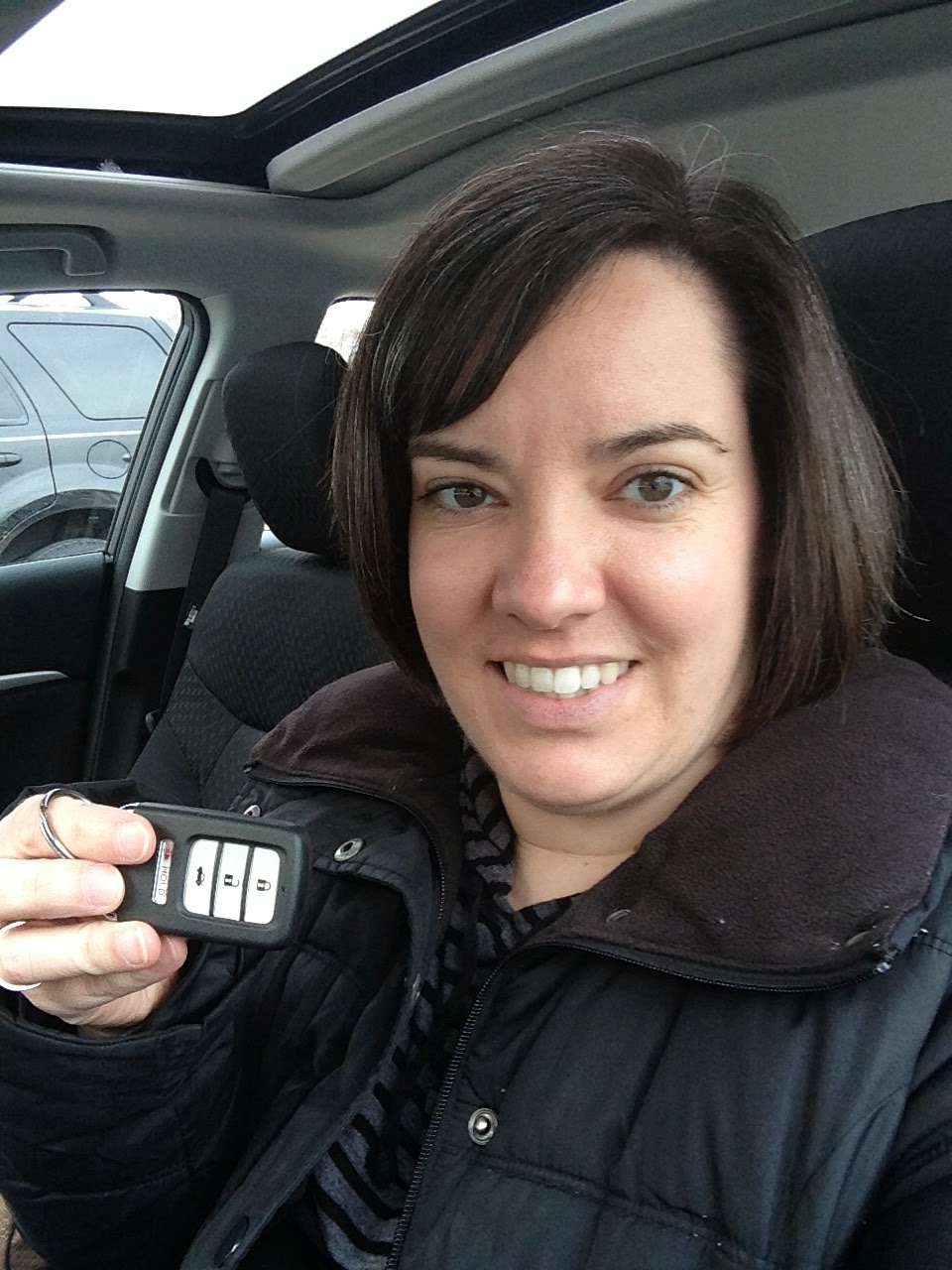 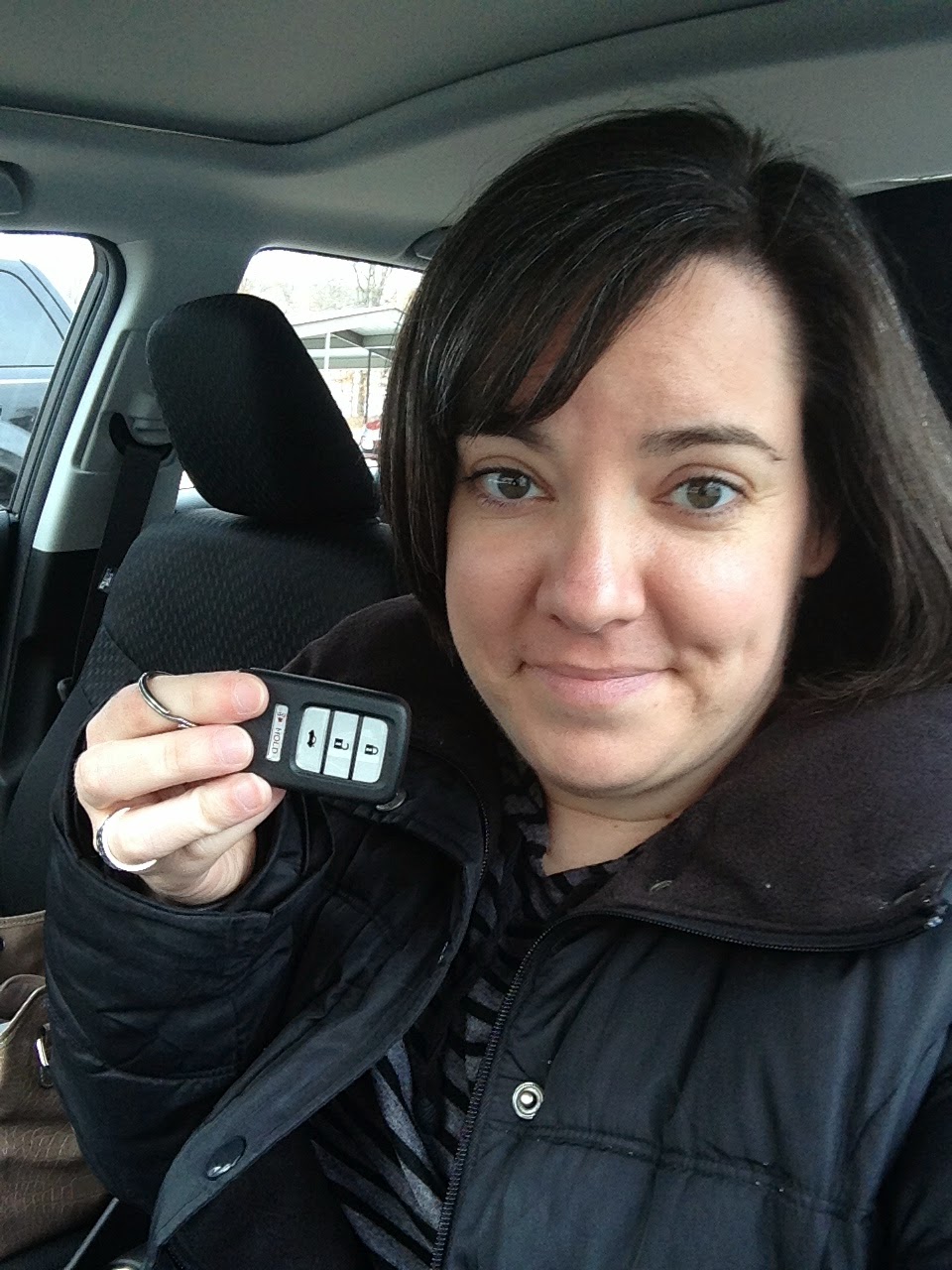 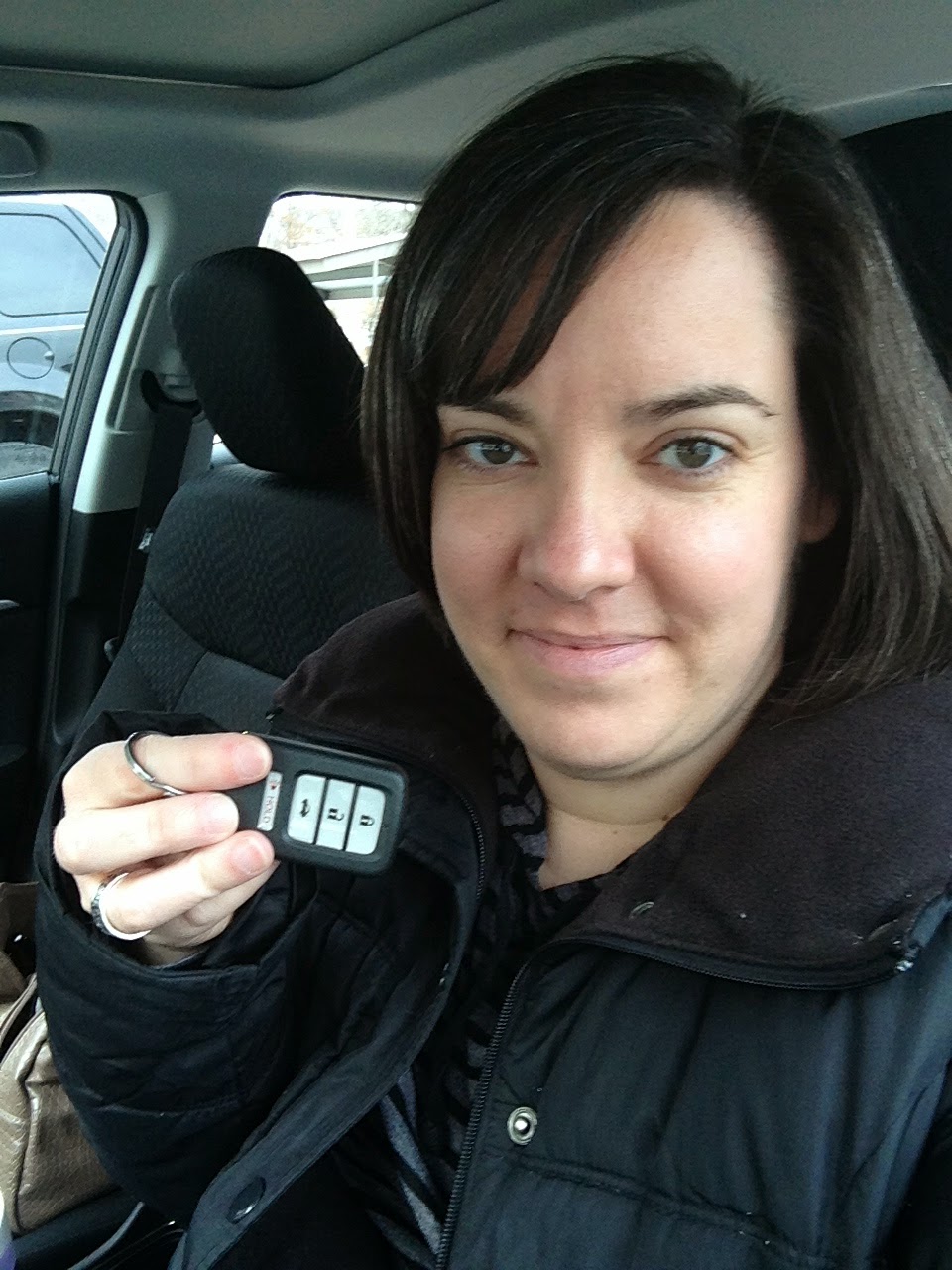 I decided to go with the mid-range Civic, the EX.  That got me a sunroof (which I didn't really want, actually, but it was the only way it came), push button start (which is fun but has taken a little getting used to), and a touch screen operating system.  Having moved from one Civic to another, it has been interesting because it looks a lot the same, but it's different.  So I keep reaching to do things that aren't where they used to be.  My biggest gripe is that the inside storage is about half.  My console is smaller and the side door pockets are about half the size.  I need storage for all the stuff I accumulate!

I have been driving my car for almost a week now, and I like it!  I'm a little sad with the temperatures this week, because I splurged and bought remote start...which is being installed on Monday.  Figures, but I'll get a lot of use out of it. 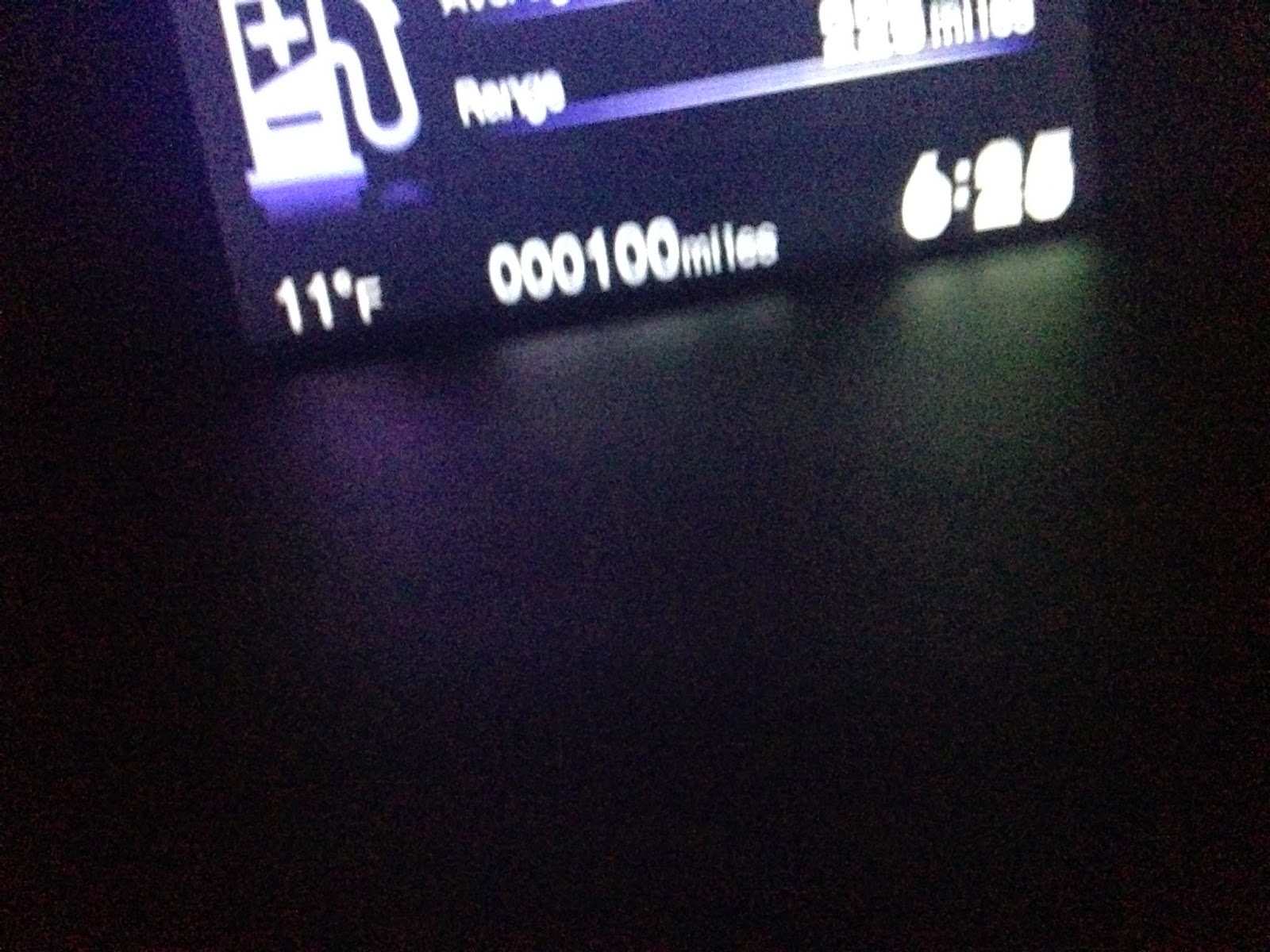 And the miles have already started racking up.  I passed 100 miles on Sunday, after only having the car for two and a half days.  Although I did take pleasure out of going places and even invented a few reasons to go for a drive! :)
Posted by Teresa at 8:35:00 PM

I love it. I am looking for a new car now. I was thinking about a Kia but I just do not know if that is what I want. I have never been big on luxury cars because I feel like a car is not an asset so I hate spending a ton of money on it. I'd rather invest.