This weekend I was able to visit Ashley and Andrew in Missouri. I was super excited since they moved a year ago and I had not been able to visit until now. I took a half-day off of work so that I could get there a little bit earlier on Friday evening. 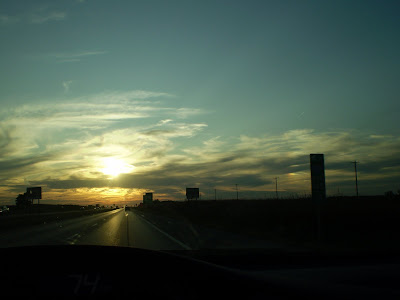 This is the sunset I drove into. I was actually trying to get a picture of this random stretch of rainbow, but the camera didn't capture it. If you look to the right where there is a tall dark thing and look to the left of that, you can sort of see the rainbow. Yes, I was driving while taking this, I'm sorry to say! 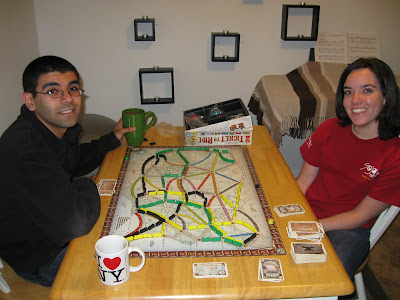 When I arrived, Andrew and Ashley took me to campus to a pizza place called Shakespeare's. It was really good! And Ashley even got me a free cup (you get one if you order a soda, but none of us did, but she asked anyway!). We then drove around campus a little bit so they could show me some of the sights. Then we went back to their apartment and we did what we do best--play games! (Ashley sent me three of her pictures before I posted this, which I was glad of because the only picture I had of Andrew was really blurry (see below) and it didn't look like Andrew spent any time with us from the other pictures!) 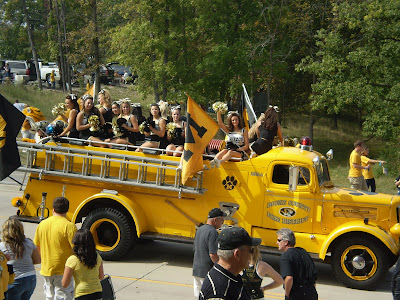 Saturday afternoon, Ashley and I hiked up the hill to the stadium so that I could see the pandemonium of a home game. It was crazy (and a lot like the GG episode where Rory and Lorelai go to a Yale game!). Ashley let me borrow one of her Mizzou shirts so that I wouldn't look out of place, which I would have because I brought a hot pink shirt to wear on Saturday! At least it wasn't purple, since they were playing Furman. Oh, and these are the cheerleaders, in case you couldn't tell! :) 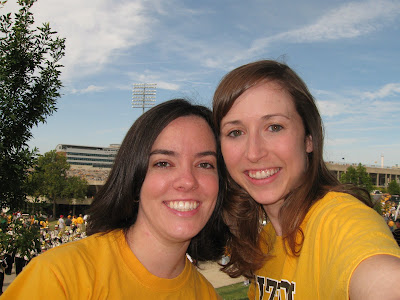 Ashley's close-up of us. She was smart enough to put the stadium in the background! 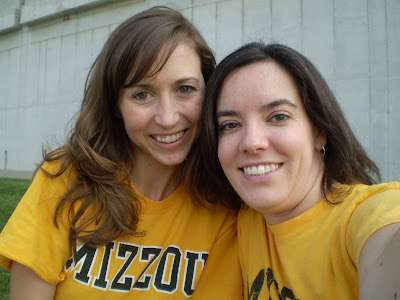 My close-up of us. Notice the plain white building in the background. And our matching yellow shirts! 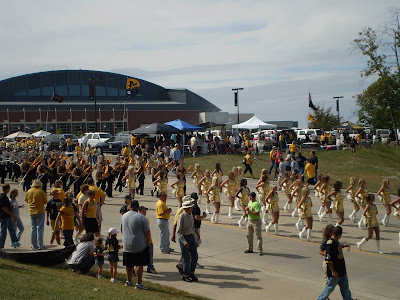 The Golden Girls. That's what their called. :) M-I-Z 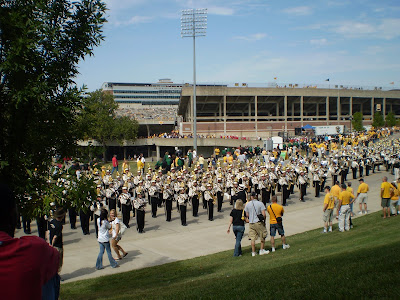 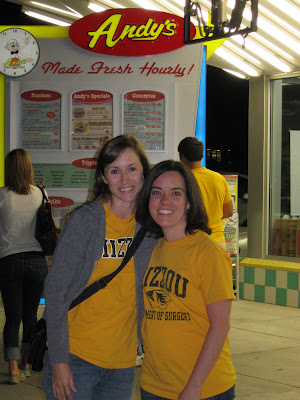 Saturday afternoon Ashley and I relaxed on the couches and watched a lot of high quality TV :). Then Ashley cooked Andrew and I dinner. Then Ashley and I went to see the new movie "Cloudy with a Chance of Meatballs." It is an animated movie based on a children's book. I highly recommend it. Just in case any of you wanted to know, if I ever have a terrible, horrible, no goo, very bad day, I have a new saying from the movie (which only Ashley may be able to understand), "I don't understand fishing metaphors!!!" After the movie, we went back to the apartment to get Andrew, who chose to stay home and watch football and do more studying, and we went to Andy's which is a frozen custard place. Yummy. Although, after the movie, Ashley and I were unsure if we really wanted to see food again for awhile! 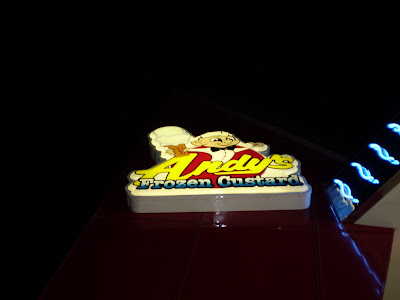 This is my artistic attempt to take a picture of the sign from almost underneath it. And I was too lazy to walk a few steps away to take it! :) 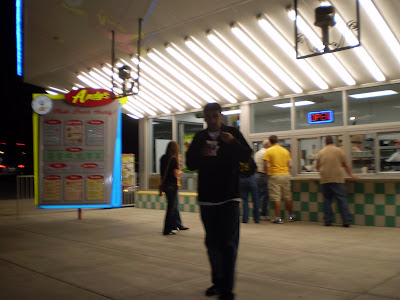 And here is the blurry picture of Andrew, just to show that he was actually a part of the day!

Thank you Ashley and Andrew for a wonderful weekend!

Yay! We had so much fun having you here! We definitely should have gotten custard before the movie. Loved the movie but really did kind of make me sick to my stomach. ha. STEVE!

And from now on when I am flipping through my cable stations and see Toddlers in Tiaras or America's Next Top Model I will think of you.(I can't believe we watched that stuff for 2 hours!)