"If we couldn't laugh, we would all go insane"

I'm pulling out the Jimmy Buffet lyrics tonight because it's the song that keeps going through my mind regarding this work move. For those of you who don't know, my department moved to a new building this week.  I thought this week was going to be super stressful because it was going to be so chaotic.  But it turns out that the chaoticness has just been really humorous to me.  If they didn't want me to work for a week, they should have just told me.  Originally we were told that we were moving on Thursday.  Does "Hey, you're moving on Thursday" sound to you like "We're going to start moving you on Tuesday?"  Me either.  But Tuesday early afternoon the MIS people started moving the computers and phones out of our office.  No big deal, I decided I could just bring my laptop in on Wednesday to do the paperwork that they still expect me to get done.  Wednesday morning at 8:45 when I got to work, the maintenance guys were dismantling shelves and removing counter tops (the equivalent of our desk space).  I lasted until about 11:00 before I went home.  Thursday was the move day, so I didn't even attempt to go in. Today, Friday, I planned to work from home for a little while and then go to the office to start settling in.  Hahahahahahahahahahaha!  Here is what I found at 2:30 this afternoon in my new office: 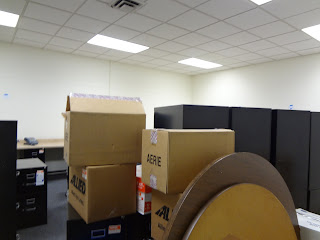 Above is the view from the front door.  All those black file cabinets are the two drawer cabinets that are supposed to be under our new counter tops.  And the back wall to the right is where the next pictures are zoomed in on. 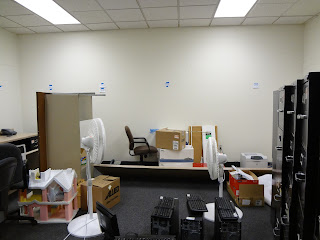 If you look at the blue tape on the wall, mine space is the tape farthest to the right.  Yesterday when I went into the office (before they started moving things in), they had the counter tops laid on the floor where they would go.  My space did not have counter top in front of it.  I'm not really sure what that means.  Maybe I'll be working from the floor.  I could put a nice rug down.  Maybe get an inflatable chair.  The possibilities are endless! 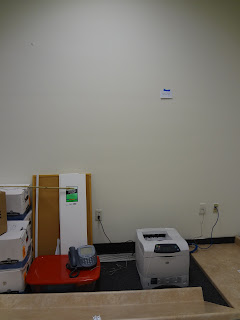 Here is a close up of my space.  See the phone on top of the red tub?  That is my phone.  Well, it's half mine.  I get to share it with one of my coworkers.  Don't get me started on that.

See now why I'm choosing to laugh so I don't go insane?  It's that or cry or get really frustrated.  Did I mention that one of the maintenance men was hanging pictures on the wall in other parts of the building today?  He must not be savvy about putting up counter tops.  I'm thinking I might have a space, complete with my shelves to set my stuff on sometime in mid-January.  Any other guesses?
Posted by Teresa at 9:28:00 PM