It's one of those posts where I've been meaning to post and haven't, so you get a conglomeration of stuff. This is very evident with my first picture: 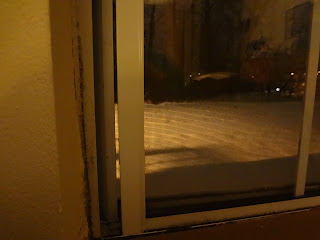 See the snow in the background?  See how the window is cracked?  For two days before the snow came I slept with my window closed.  Two of the few nights this winter that I haven't cracked my window a little bit.  One night it was because I went to open the window and it was frozen shut and I figured it was a sign that I shouldn't sleep with it open.  But I was also kind of hot those two nights, so I decided snow or not, I was sleeping with my window open.  I'm weird.  I know.  You don't have to tell me to confirm it. :)

Friday night I went to the church for dinner.  And then I watched everyone play dodge ball. With toilet paper.  I must admit, I was skeptical, but it worked really well.  And was kind of funny.  Most of the rolls were taped so they wouldn't come unravelled, but some weren't.  Apparently it is harder to throw the smaller the role gets. 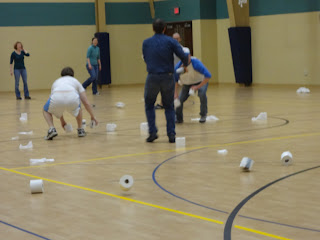 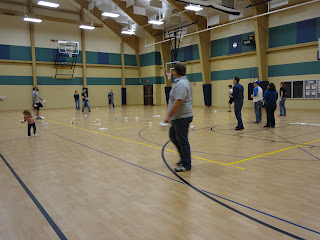 Notice the small child on the left hand side of the picture.  She followed her dad around, fearlessly.  She was kind of oblivious to all the toilet paper being thrown past her (and it was getting thrown at a pretty good speed).  I think the only time she got hit was when she was on the sidelines. 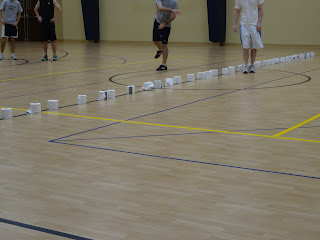 The line of toilet paper kind of cracked me up!

I observed from the sidelines.  Taking pictures, chatting with Andrea (who had the excuse of having an infant in her arms), and holding said infant.  I was very content from the sidelines.  I hated dodge ball as a child and have no desire to ever play as an adult.  But it was fun to hang out with friends and watch them have fun throwing toilet paper at each other!
Posted by Teresa at 6:18:00 PM