So, we were not immune to all the flooding this past week from all the rain. Emily got water in her bedroom. We think it came from the foundation, but are not really sure. Maintenance is "taking care of it." That's all I'll say about that. 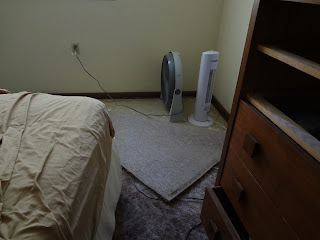 The carpet is pulled back and they cut out some of the padding.  Because of all that, Emily has a new bedroom: 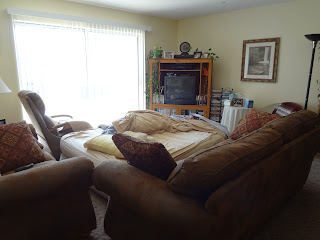 She's been sleeping in the living room because her room smells pretty bad, we've had the window open to help with the smell so it's cold, and the fans are pretty loud.  I am really bummed for her and hope that maintenance follows through with their statement that they will do whatever we want to remedy this.  But, in true Emily fashion, she has had a much better attitude about it than I would have had if it were me.

In other news, April also brings flip flop weather, so this is what I did yesterday: 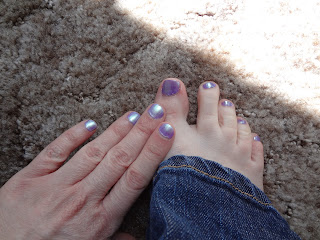 Not a professional mani/pedi.  But I did get creative and use two new polishes I bought.  A lavender coat first and then a purple/iridescent coat on top.  I was going to take the picture in the little splash of sunshine on my floor because I'm still marvelling at the sun, but you couldn't really see the color if I did that, so I took it next to the patch of light instead.
Posted by Teresa at 3:06:00 PM