I went up to the suburbs this weekend to see my family.  One of the things Mom suggested we do was go to the cemetery to see Nicole's grave.  Mom, Ann, me, John, and Michael were able to go.  Here are some of the pictures.

John and Mom clearing the grave... 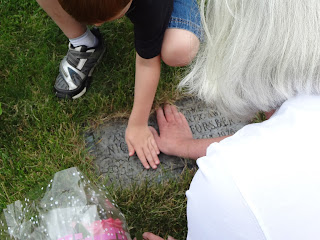 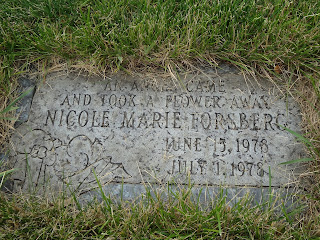 Nicole was buried in a children's section of the cemetery.  This is one of the memorials that was near Nicole's grave site... 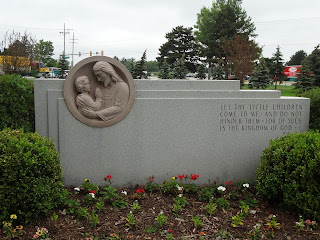 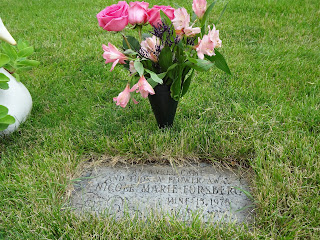 Mom also answered some questions for me that I sent her and she gave them to me over the weekend.

When did you find out about Nicole's condition? We found out about Nicole's condition a few weeks before my due date.  The doctor said he suspected the anencephaly but would not tell me until he was sure.  He had me go for an x-ray (ultrasounds weren't done then) and telling me he thought the baby was breech.  He said it would be better to be prepared in case I went into labor in the middle of the night.  I suspected something was wrong my whole pregnancy so when I heard them page the doctor to x-ray, I knew my fears were to be realized.  Grandma Koszycki was with me and they called her into the room when he told me.

It seemed once a month I would get sick.  It would come on very quickly then be gone.  I thought maybe it was the time I should be getting my period.  I once asked your dad what we would do if something was wrong with the baby.  So I did have a premonition something was not right.  After finding out, I went weeks past my due date.  I was torn between the thought of her being born because at least she was still alive and with me.

Did the doctors discourage you and Dad from seeing her while she was in the hospital?  Your dad saw her within minutes of her being born.  They took her out of the room so quickly my doctor did not even look to see if she was a boy or girl.  He had to send a nurse out to find out what sex the baby was.  One of the nurses started crying.  I was telling her it was alright and my doctor ordered her out of the delivery room so as not to upset me even more.

The doctor told me not to see her as it would haunt me for the next time I got pregnant.  They told us she would live for a few hours but she lived for 15 days.  I told your dad (after I was home) that I wanted to see her.  At first he said no so I told him I would find someone to take me when he wasn't home.  See, I though she wouldn't give up until she met me.  We called the hospital to tell them I was coming to see her.  They put a hat on her to cover the deformity.  I held her, she squeezed my finger, so I took that as a sign that she knew who I was.  I only held her once.  Grandma and Grandpa Koszycki went with me the next day to see her.  We just looked through the window but I could already see how she was deteriorating.  That is the last time I saw her.  My doctor later told me he was happy I did see her.  The funeral director took pictures of her.

Were visitors allowed in the hospital?  Visitors could see me but not Nicole until after I visited her.

I remember you telling me once that the doctors encouraged you to get pregnant right away if you and Dad wanted to have more children.  How did you feel about that? The doctor told me I could have more babies but the chances of this happening again were greater for me than before.  I felt I needed to get pregnant right away or I never would.  I was very scared.  This is when I learned never to say, "It won't happen to me" because anything could and did happen to me...

What were your feelings throughout your pregnancy with me? I was worried the whole time I was pregnant with you. But my doctor told me about the testing we could do to be sure you were healthy. He told me no matter how many times I got pregnant we would run the tests. I asked what would happen if the same condition occurred again and he said we would talk about it if we needed to. I could not focus on the bad thoughts--I had Chris to take care of. I also had to prepare for your birth. I knew deep in my heart God would not take another baby from me.

Was I born early or on time? I think you were born early. We had a 4th of July party at our house and I was in labor most of the day. Not hard labor but I knew something was up and didn't tell anyone. But after the fireworks, when we were going home, I said I would have you the next day. Everyone just laughed--but it was true.

How did you deal with the anniversary of Nicole's death being so close to when I was born? I thin it was good to be pregnant with you at her anniversary because it gave me something good to concentrate on.

When did you tell me about Nicole? I don't remember actually sitting you down to tell you. I think it was just going to the cemetery to visit her grave is how you knew about her at a young age.
Posted by Teresa at 9:59:00 PM