Some snow pictures from today 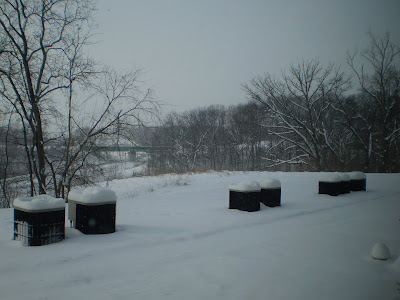 Here is the view from the sliding glass door of the apartment. I realized that this is the first snow upon snow that I have seen since I moved to Illinois. Usually one snow melts before the other comes. So, it's hard to say how much snow we got today (I think I heard about four inches). 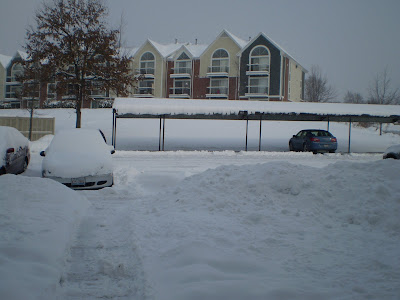 This is the view from outside the front door of my apartment. At least the sidewalk had been cleared by the time I ventured out! I forgot to take pictures of my car before I shoveled it out. But, here's a funny story...I had cleared my car off, but because I left so late, the snow plows had plowed snow behind my car, and I had stupidly pulled up pretty far last night, so I had to shovel behind my car. While I was shoveling, this Indian couple were walking down the road and stopped to watch me. Then the woman starts walking toward me. I just kept shoveling. But she stood next to me while her husband TOOK A PICTURE OF THE TWO OF US! I tried really hard not to laugh. I had to refrain from not asking for a copy. I finished shoveling and then left.
The main roads were well plowed by 3:00 this afternoon, but the side roads were still a little sketchy. My original plan was to visit a friend, but I realized that there would probably be no where for me to park on her street because it probably wouldn't be plowed, so I headed straight over to Dad and Amy's to play some Wii with the kids. While I was there, we were able to watch three deer frolic up and down the street. At one point in time, the buck stopped right in front of the house in the middle of the street. I sent Josh for the camera, but before he got back, he had already run off, so no deer pictures :( 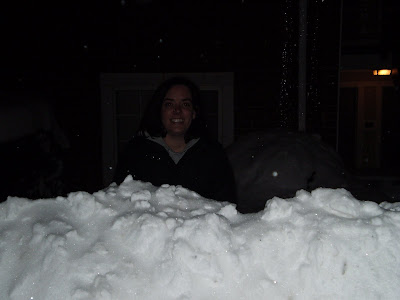 When I got home this evening, and much to Emily's dismay, I requested her assistance outside to take a few pictures. This is not a true representation of how tall the snow is, but it is the pile of snow from the plow plowing out each parking spot. I am standing directly behind the snow pile. I do believe this might be the most snow I've seen since I've lived in Illinois. But I could be wrong. This is how deep the snow is from the other side. My boots had totally sunk into the snow. My back foot may truly be in the snow as it has fallen, not from the snowplow.
I have discovered that I really don't mind driving in the snow. It was kind of fun slip sliding on the side streets. Snow is fairly predictable. As long as you go slow and steady, you aren't likely to have an accident. Plus, my dad has a four wheel drive truck, so I knew he could come save me. It's the ice I don't like. So, even though you guys might think I was being a wimp for not going to work today, it wasn't so much that I was afraid to drive in the snow, it was just that I didn't think going to work was necessary when I could do the work from home and take the rest of the day off :)!
Posted by Teresa at 7:56:00 PM

Lucky! The snow looks like tons of fun. GA actually got about a 1/2 inch. Mass hysteria has of course ensued. There was tons of ice on the side roads today, but alas I had to go to work b/c I have negative vacation time. :( Oh well. Have fun in tthe snow for me!

How fun! If I was there I'd be playing in the snow too. Did you make a snow angel?? It's really cold here but no snow. :(