I have a friend who recently bought a house with some land and he had everyone over for a bonfire last night. This was part of the email he sent out, "I'll be lighting the bonfire @ 7:15 and you probably don't want to miss that, if you now the kind of stuff I like doing!" So, I knew the bonfire would be big. But I didn't know it would be explosive. We all stood ample distance from the huge pile of brush, because we really do know the kind of things he likes to do. He lit part of it and then he stood back a ways. Turns out he had a gun and a propane tank. A couple shots later, we had quite the toasty fire going! A friend took these pictures. We just kept thinking that it looked like she had zoomed in really close, so she finally got a few people to stand in front of the fire. And the pictures still do not do it justice. It was a fun evening. I don't know if I've ever seen a fire quite that big before! 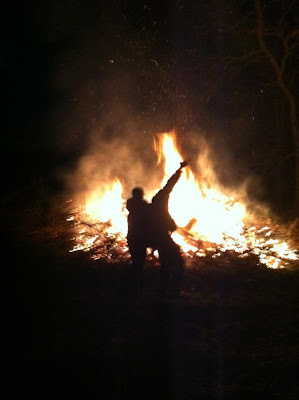 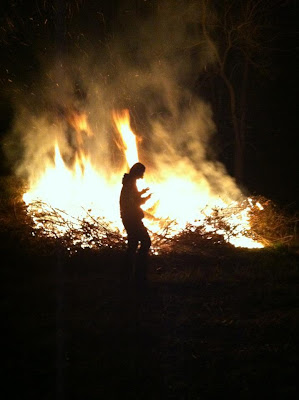 Kari looks like she is doing a fire dance but she was really saying, "It's really hot right here!"
Posted by Teresa at 7:56:00 PM

A gun and a propane tank? Why didn't you tell me you were in Georgia! lol