What do mashed banana, honey, and eggs have in common?

They were all in my hair yesterday. Along with milk and olive oil.  Kinsey and I decided to have a Gilmore Girls night.  But it couldn't be just any ordinary Gilmore Girls night.  We had to do it up big.  Face masks and hair masks.  I must admit, I was a little skeptical.  I've never even heard of hair masks.  But I was game.  So, the plan was to watch an episode of Gilmore Girls while we ate our pizza and then go shopping for all the ingredients we would need.  One small problem.  Kinsey didn't know where the remote to her DVD player was and all you can do on the actual DVD player is play, pause, and stop.  Which meant we had to start a disc from episode one, even if we wanted to watch episode 3.  Which is fine, because there are very few bad episodes of Gilmore Girls.  But we had already discussed which episodes we wanted to watch.  But we could not conquer the DVD player, so we gave in and watched the first episode.  When it was done, we paused it so that when we got back from shopping we could watch the second episode.  Except when we got back, the DVD player had shut off.  So, while we were mixing up our hair masks, we watched the first episode again!  But then we were able to watch the next three on that disc while we made ourselves beautiful.  Here are some of the pictures I made Kinsey take and post to Facebook against her will.  There is no shame in wearing purple and pink shower caps or putting masks on your face.  No shame at all!  Well, until people are pulling chunks of banana or egg yolk out of your hair the next day.  Then there might be a little shame.  Even if you know you've washed your hair twice. 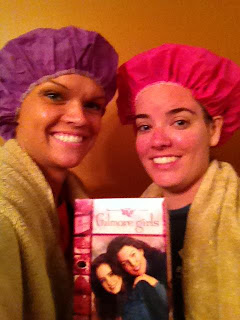 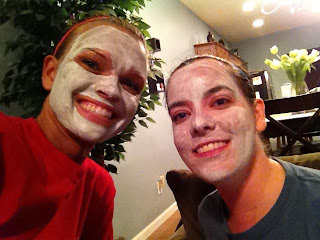