This is a little reminder of what I got to do last year on my birthday: softball and holding a baby! 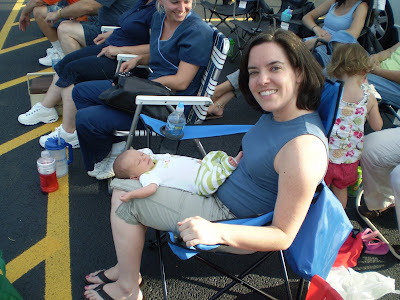 Hudson was only a few weeks old! 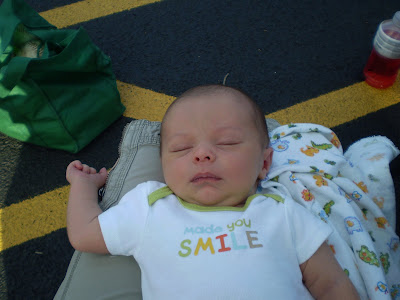 So I thought it would be fun to show you what a difference a year makes (don't pay any attention to the gray in my hair!)! 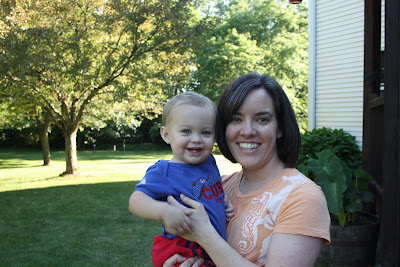 Now he's taking a few steps and he's got teeth and will smile at you if you just look at him (unless you want him to smile in a picture! Boy, you should have seen how much it took to get this smile!)

This was actually taken on the 4th, as you can tell from Hudson's patriotic wear. Not so much from mine. Oops!

My birthday weekend was so much fun! Sunday evening I had some friends over to Kari's house to play games and eat dessert. We played Taboo and laughed until we almost peed in our pants!!! First it was in ways people tried to describe things. Than it was because Joe played Taboo so aggressively he tore a hole in his shorts! Than it was because Joe tried to kill Kristi by tripping over her chair and she managed to escape with a full pitcher in hand. Oh my, was it an exciting evening! :)

Than Monday was the 4th. That meant a picnic at Kari's parents' house with about 40 other people. Good food. Good games. Good shade to watch the games in. Kids to play with. People to catch up with. And than off to fireworks with the million other people in Peoria (slight exaggeration, but sometimes it doesn't seem like it!)

Than Tuesday I slept in until 9:15. Read. Emily came home and we went to get a free movie (thank you Family Video) and lunch from QDoba. Than home to open presents. You'll never guess what I got! Seasons 6 and 7 of NCIS! So we watched 3 episodes. Than I went to Kari's parents' house for dinner. Doug and Nancy adopted me into the family before Dad and Amy moved. But since they moved, they have especially adopted me! They do family birthday dinner for everyone in their family and they included me. I got to submit my menu--barbecue chicken, asparagus, and garlic potatoes. And than we had apple pie and ice cream for dessert. And than Kari beat me at a game of Bags. And than everyone beat me at a game of croquet. But don't worry, I didn't mind. It was the spending time with family (which included Kristi and Clay who were visiting from New York) that mattered to me. It was very special that they became my family since my family is no longer near by.

And I also got all my Facebook messages...and texts...and phone calls from friends and family! I felt very loved all day!

And than I got to stay up late reading a book because I knew i could sleep in the next day!

Thanks everyone for making my day so special!
Posted by Teresa at 6:19:00 PM