From beginning to end, this day has been a comedy of errors.  Surprisingly, even taken together, the following events just kind of made me laugh.  Even though it could have easily put me into a really bad mood.  My wet jeans on the other hand...

My comedy of errors actually started last night.  Emily needed an ice pack for her lunch today and have two, so I told her to use one of mine.  No big deal, I only need one.  So this morning, I got the second ice pack out and noted it had an odd shape to it.  When I looked closer, I realized there was a small slit in it, which means when it thawed, the gel would get all over my cooler.  So, I put the ice pack in my bag.  Crisis averted.  Then I grabbed a frozen pizza for lunch today, went to put it in my bag, and realized that I bought a MUSHROOM pizza.  I HATE mushrooms.  I sucked it up and decided I would have to eat it sooner or later, so I took it with me.  Another crisis averted.

I was several blocks from home when I realized that I wasn't wearing my watch.  I use it all the time during work to check times during sessions.  I really don't like using my cell phone because I think it looks much more rude.  So I debated whether to go home.  I only had two clients.  I made the decision based on the fact I was going into a school today and really didn't want to use my cell phone during that session.  So I went back home for my watch.

When I got to work, I was working on the computer and looked at my watch, which seemed a little slow.  I went to get my cell phone to check the time compared to my watch and realized I had left my cell phone at home on my bed.  Sigh.  But a good thing that I had gone back home for my watch.

I went to my school meeting (a first with a new client) and the secretary said she should be at lunch.  Which surprised me because I got there early.  Turns out the teacher told me they eat lunch at 12 and have recess at 12:30.  But they actually have lunch at 11:30 and recess at 12:00.  So, I didn't get as much time as I had anticipated.

Back to work to eat my pizza dough, since I picked off all the mushrooms.  I justified a Dr. Pepper, even though I've been trying to cut back.

I came home for a half hour after work and then left to have dinner at friends' house.  I was half way there when I realized I did not bring my purse.  I didn't need any money, and the house was only five minutes away, so I decided to risk not getting pulled over.

Like I said, comedy of errors from beginning of day to the end.  But it was a pretty good day regardless of all of that.

PS.  This is how I solved the problem of the wet pants: 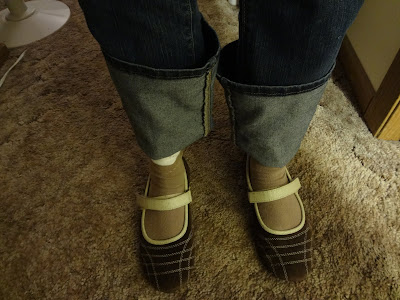 PPS.  These are the velcro shoes I mentioned in my Facebook status yesterday.

Update: As I was getting ready for bed, I almost put toner into my contact case instead of contact solution.  They are next to each other in the cabinet.  I had it out of the cabinet, in my hand, with my finger on the top to pop it open when I realized what I was doing. Oy!  That would have been very bad in the morning when I went to put my contacts back in.
Posted by Teresa at 8:32:00 PM