I am not ashamed! 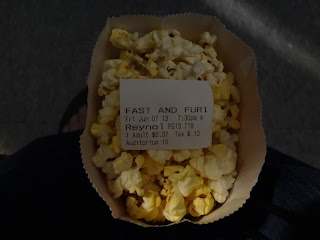 A kind soul finally took pity on me and willingly went to see Fast and Furious 6 with me! :)  It was everything I expected a 6th movie to be...mindless plot with a few twists that you might not expect...cheesy acting...comic relief...lots of cars racing (although I forgot that I've been feeling a little dizzy this week and I may have gotten a tad bit dizzy in the movie)...lots of ridiculous stunts that would never happen in real life.  You know, just the average movie.  But I can't help but like Paul Walker.  So sue me.  I know he's not a great actor, but he has really pretty eyes.  And he was in Eight Below.  Who wouldn't like a guy in a movie about dogs?  And just for the complete skeptics out there...I just happened to see that Fast and the Furious 6 had grossed three times as much at the box office than the second Star Trek movie last week.  And for the real spoiler...they set it up for a 7th movie at the end of the previews. :)  I can hear the collective groans and it makes me smile.

And to top it off we went to the ghetto theater, so we had added commentary from the audience!  "It wasn't that funny!" after someone laughed really loud at something on screen.  And "He is so hot" in reference to Dwayne Johnson, I think.  Never a dull moment.  And $2 popcorn and drink.  Not bad for a Friday night at the movies!
Posted by Teresa at 10:16:00 PM