I was just on Facebook and came across this article, Nine Lies in the Not-Yet-Married Life.  I'll be honest, I only skimmed it.  Partly because I didn't know I was supposed to feel this way: "Singleness’s greatest sorrows are secretly reinforced every February in the souls of the not-yet-married still waiting for their wedding day. While many of our friends and family are inundated with dates, flowers, chocolate, and love notes, lots and lots of the valentine-less are overwhelmed with everything from impatience to bitterness, from shame to regret to confusion."

Ironically, Valentine's Day is the one day a year I feel most glad to be single. :)  Really, if I'm being honest, I feel indifferent.  But I kind of think Valentine's Day is a foolish holiday, even when I have been in a relationship in February.  It's much harder to tell your significant other that he doesn't have to spend extra money on flowers just because the calendar says so. Because you'd appreciate flowers more on a day that the calendar doesn't tell him to buy them.  And that you'd just as soon stay in and watch a movie than battle the crowds at the restaurants.  Trust me, telling him these things does not endear you to him like you would think.  It kind of ruins a holiday that he might find enjoyable.

That being said, I can think back on many Valentine's Days that I have enjoyed as a single person.  One year in college, I was actually on a retreat with Campus Outreach.  We went to Atlanta and saw the Hawks play.  And played Killer Uno until really late.  Oh, we also learned about Jesus (but sadly, I couldn't tell you the theme of that event, just the stuff we did) And I remember getting a sweet Valentine from my small group leader.  Actually, I think I still have it.  Let's pause for a moment while I go look for it. [Insert elevator music here] 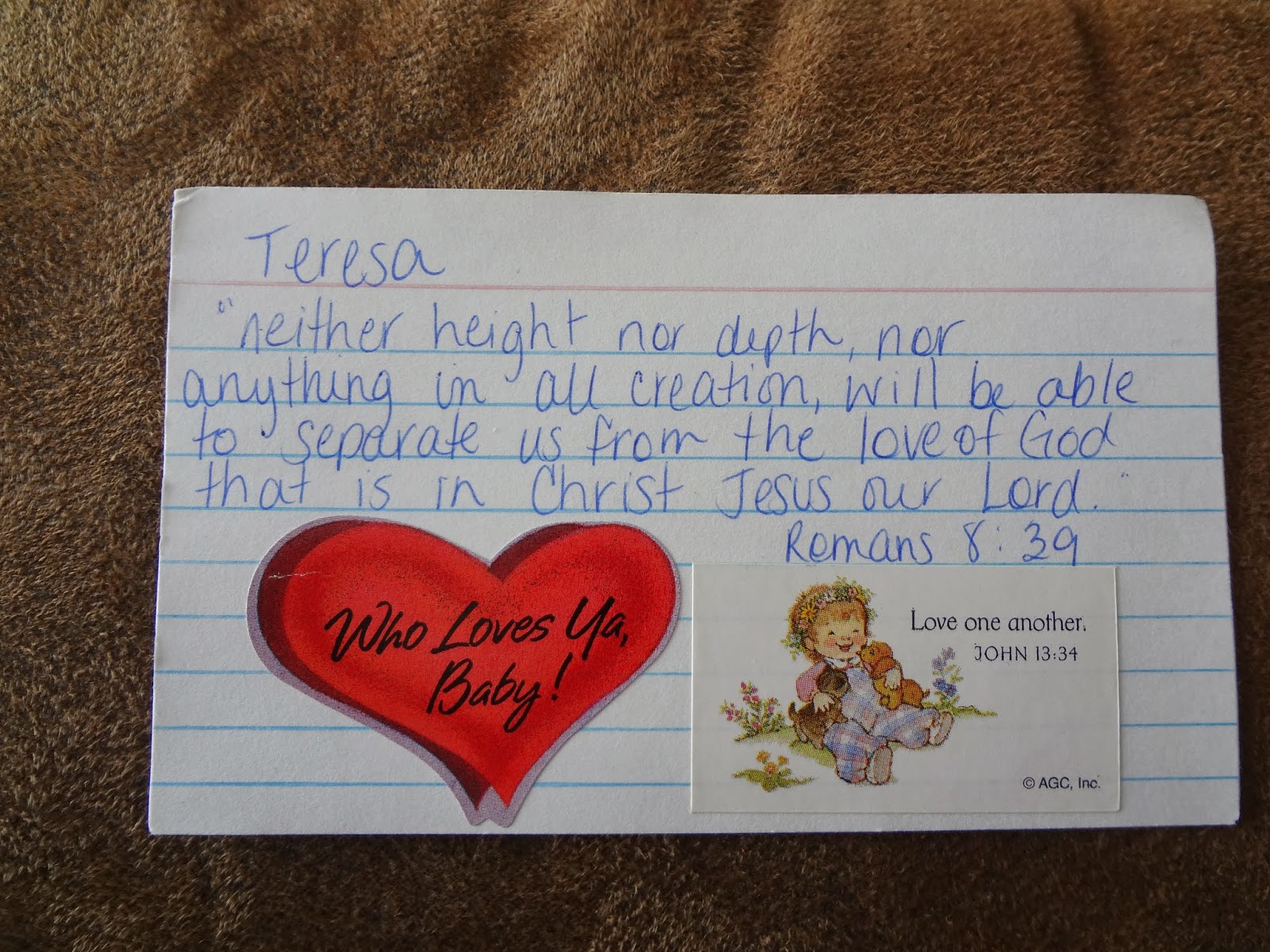 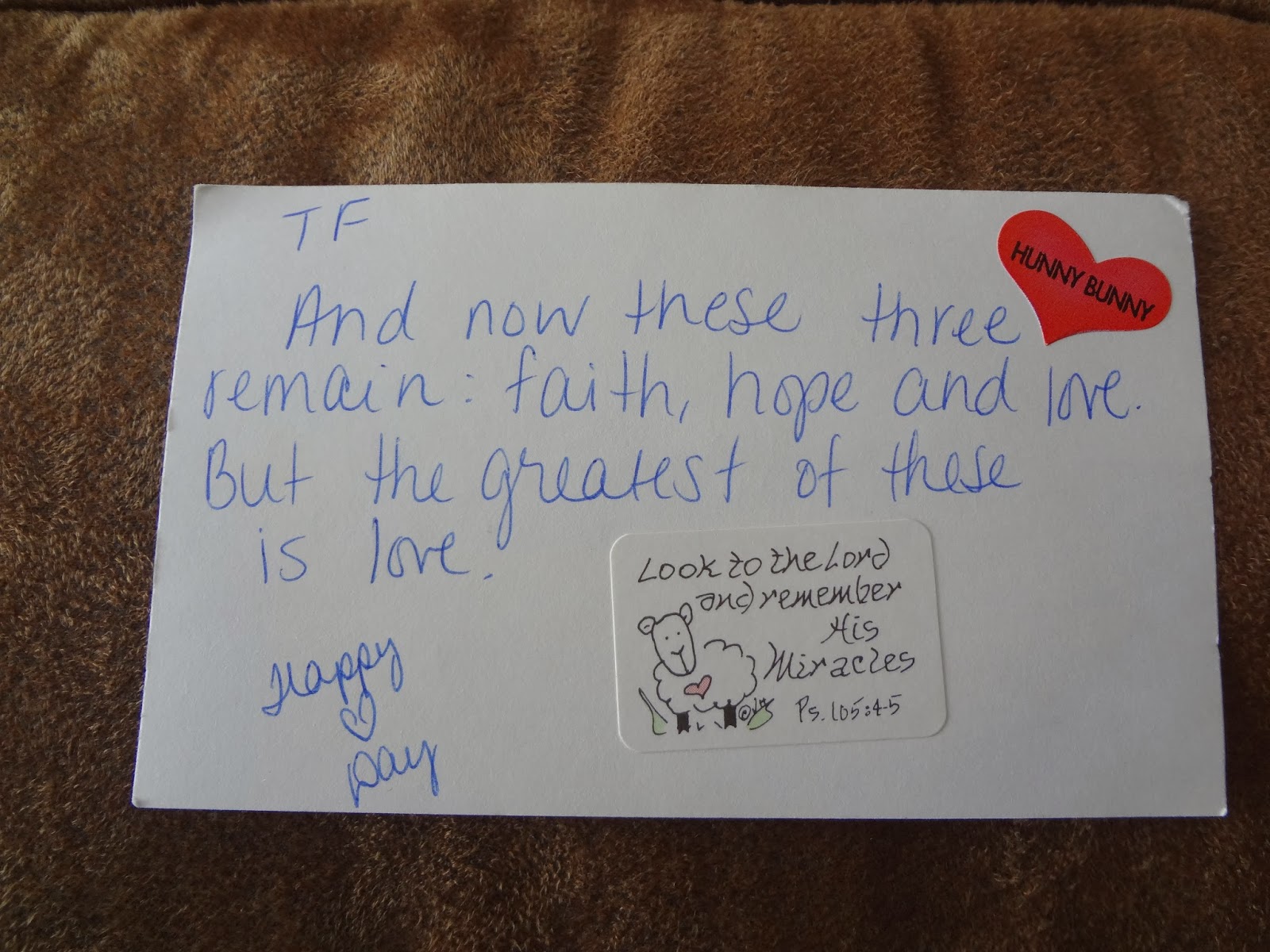 Oh.my.goodness. I am such a pack rat.  This cute little index card is from my first Valentine as a believer in Christ.  There are a few miracles in this.  1.  That God would accept me as His own.  2.  That this card has survived at least 7 moves in the last 16 years.  3.  That I knew exactly where to look for it (stay tuned for my next post, which will be all about the box I found it in).

Okay, so that was one Valentine's.  The next that comes clearly to mind is the first year I lived in Illinois.  I moved to Illinois at the end of January.  So one of the first things I did after settling in was to send Valentine cards to all my single girl friends back in Texas.  It was fun to do because it made me feel like I was a part of their day even though I was so far away.

Then there was the year I was dating and got sick the whole week leading up to Valentine's Day.  Okay, so maybe I didn't mind the flowers, but I still told him not to get them! :)

Last year, I believe we had our Thursday night Bible study just like always.  So, I got to spend it with a bunch of friends who love Jesus just like I do.  My kind of night.

This year, I sent Valentine's cards to family.  That was fun too.  Such an encouragement to put those in the mail.  I have no idea why I enjoy sending things in the mail, but I do!

And tonight I am off to a friend's house for some girl time.  Kayla loves Valentine's Day, so I am excited to spend the evening with her because it will make me happy that she is happy.  And again, I get to spend it with friends!

PS.  As I was editing this post, I remembered that I probably had pictures of that Winter Retreat I mentioned above.  Ignore the yellowing pages of the album and my lame attempt at "scrapbooking."  Just enjoy the fact that I also knew right where to find these gems! 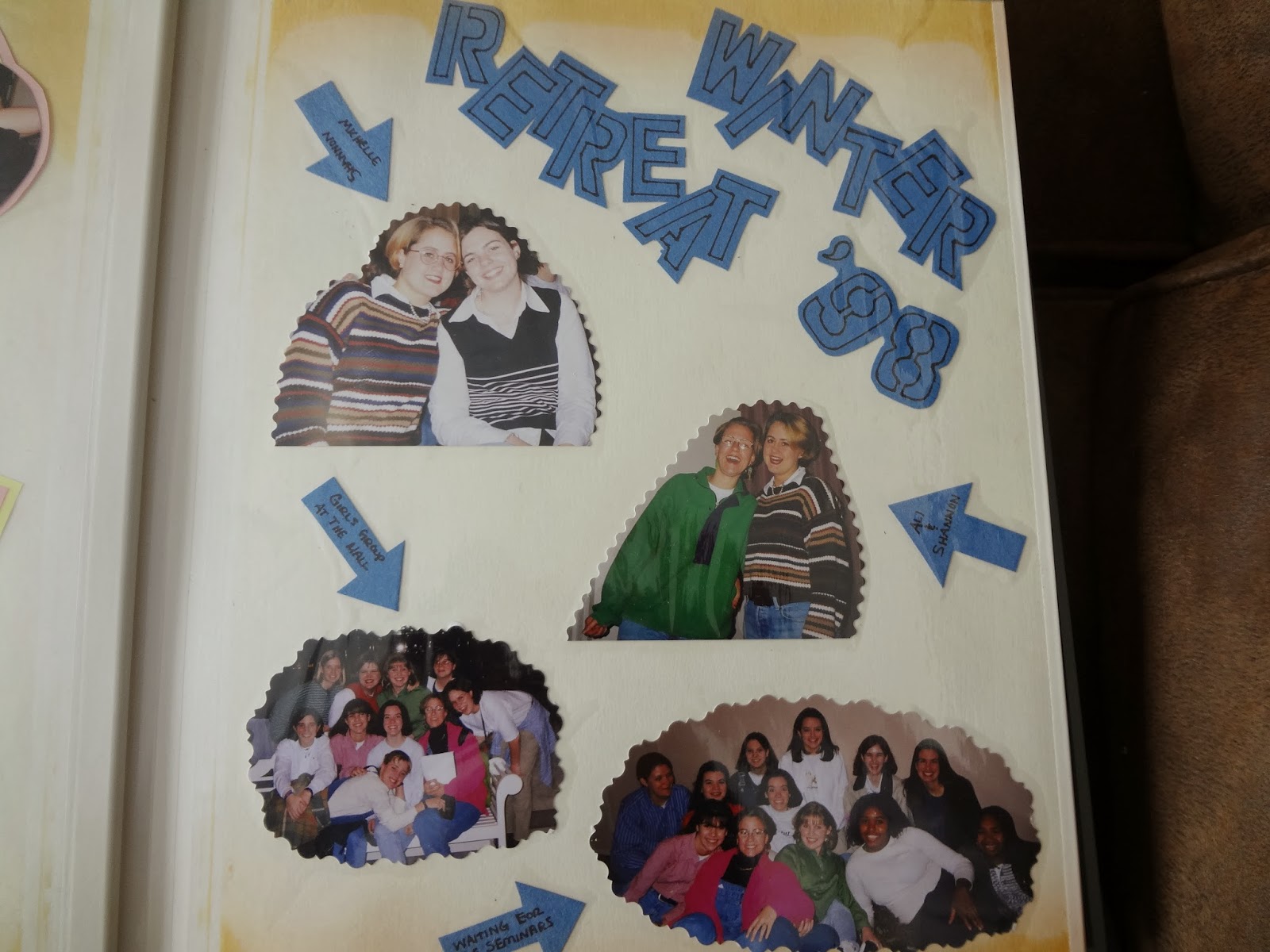 (the girl in the green...Ali...was the one to give me the Valentine mentioned above.  The girl with her, Shannon, was the one who led me to Christ three weeks before on January 21) 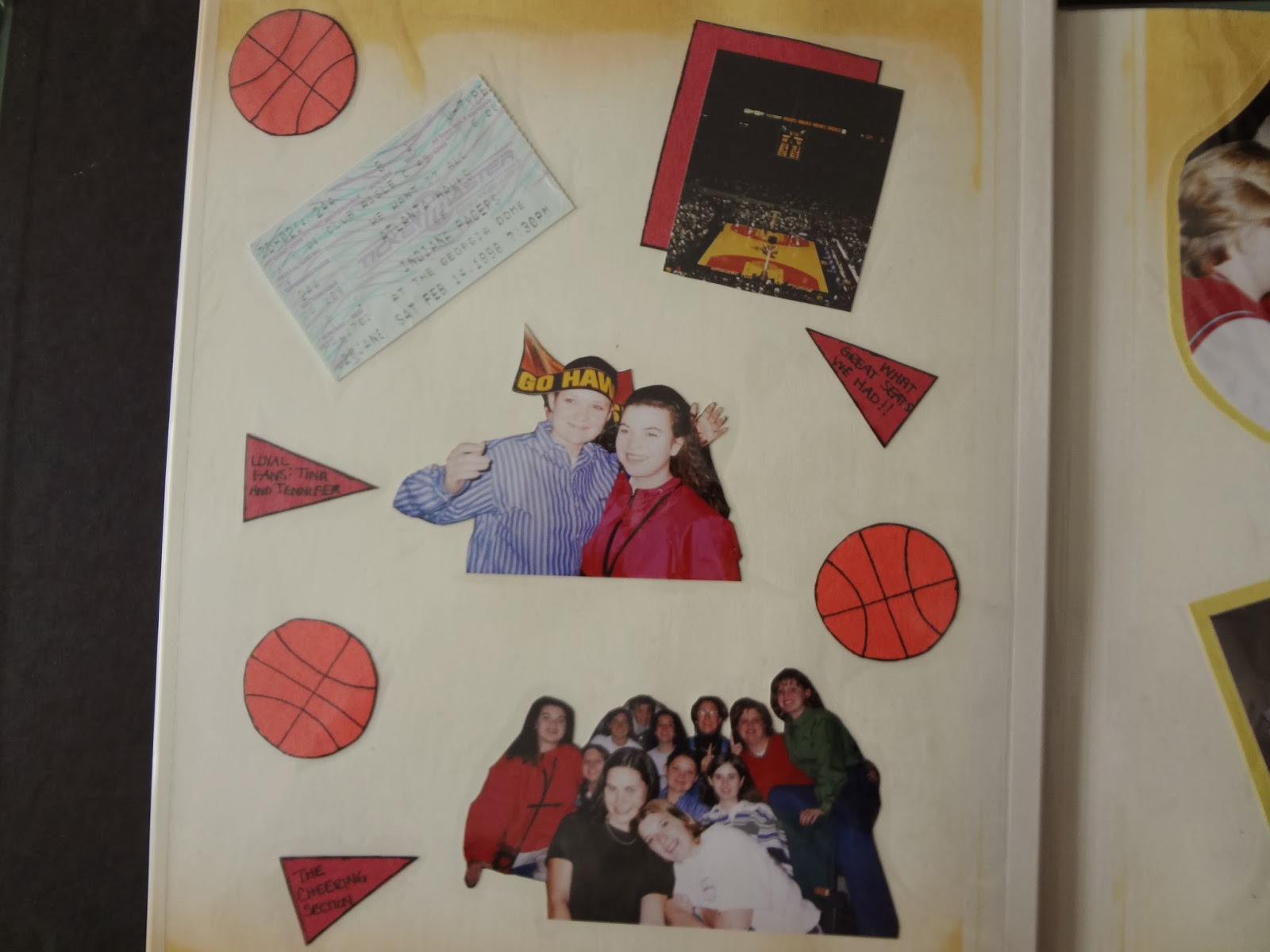 See...I have a good memory (usually for things I don't really need to remember)...horrible seats at a Hawk's game. 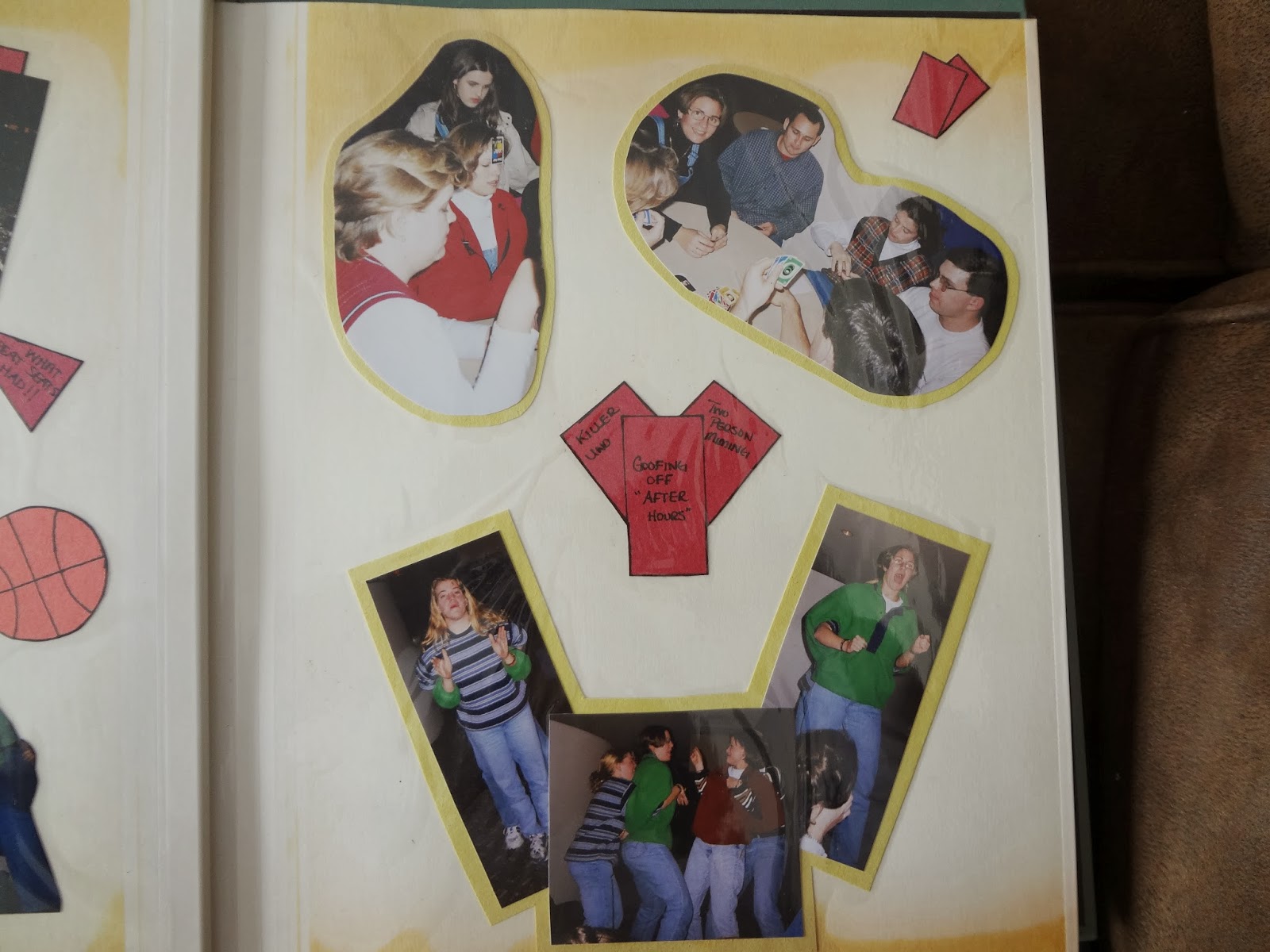 And the top two pictures are of a rousing game of Killer Uno.  A college staple at retreats and late evening hangouts.
Posted by Teresa at 2:35:00 PM