The last full day everyone was in town we headed out to the country. 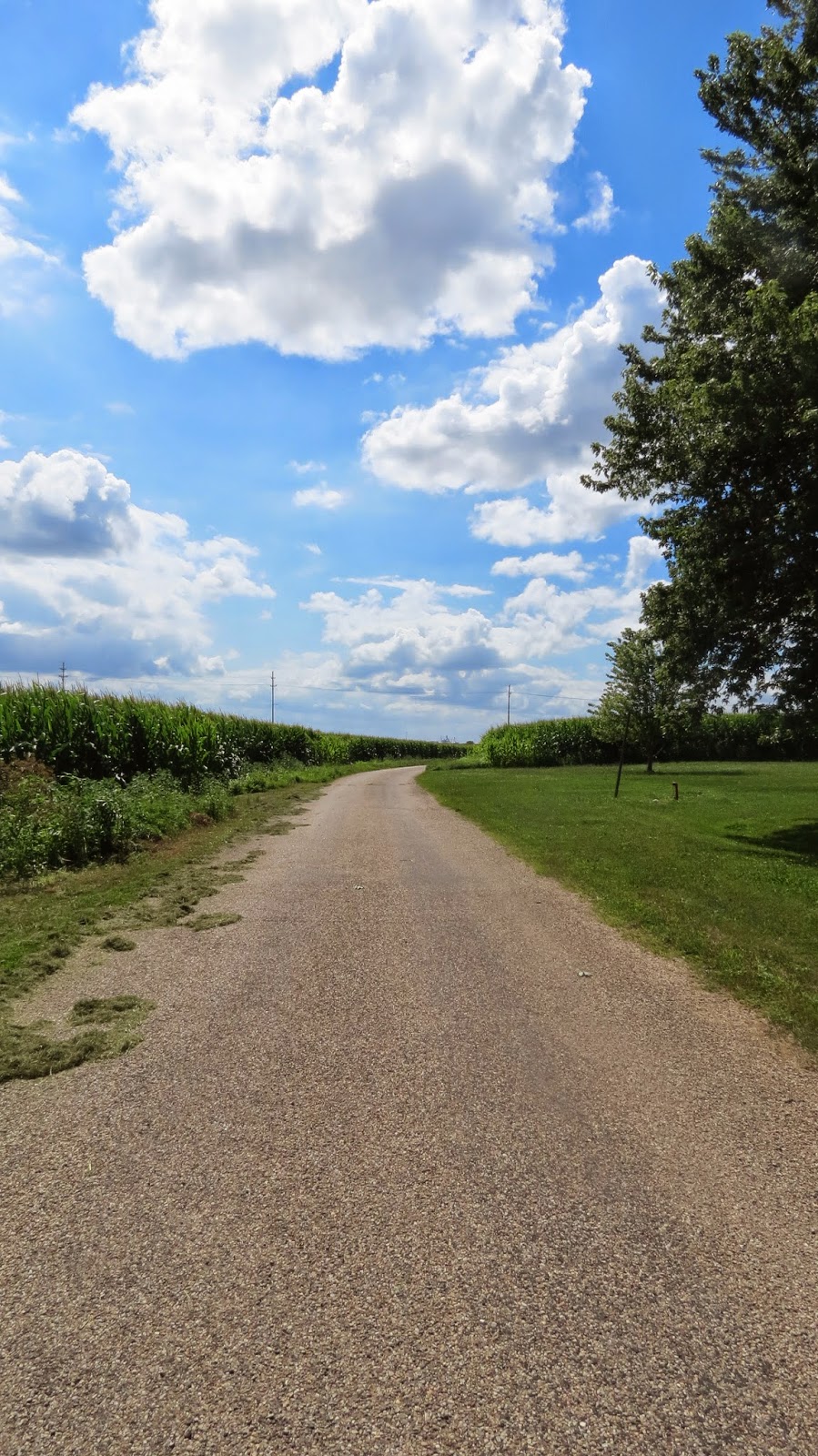 Amy's cousin and wife live in Edelstein, where Amy grew up.  Isn't the above picture perfect?!  Brianna took a lot of great pictures, many of which you'll see below.  Amy's family--brother, two cousins, and their families--all came over for a picnic.  So there were A LOT of people.  It was a lot of fun.  I told Amy that when she and Dad come into town, it's like they bring all these other people with them (even though they live in Illinois, I really only see them when Dad and Amy are in town). 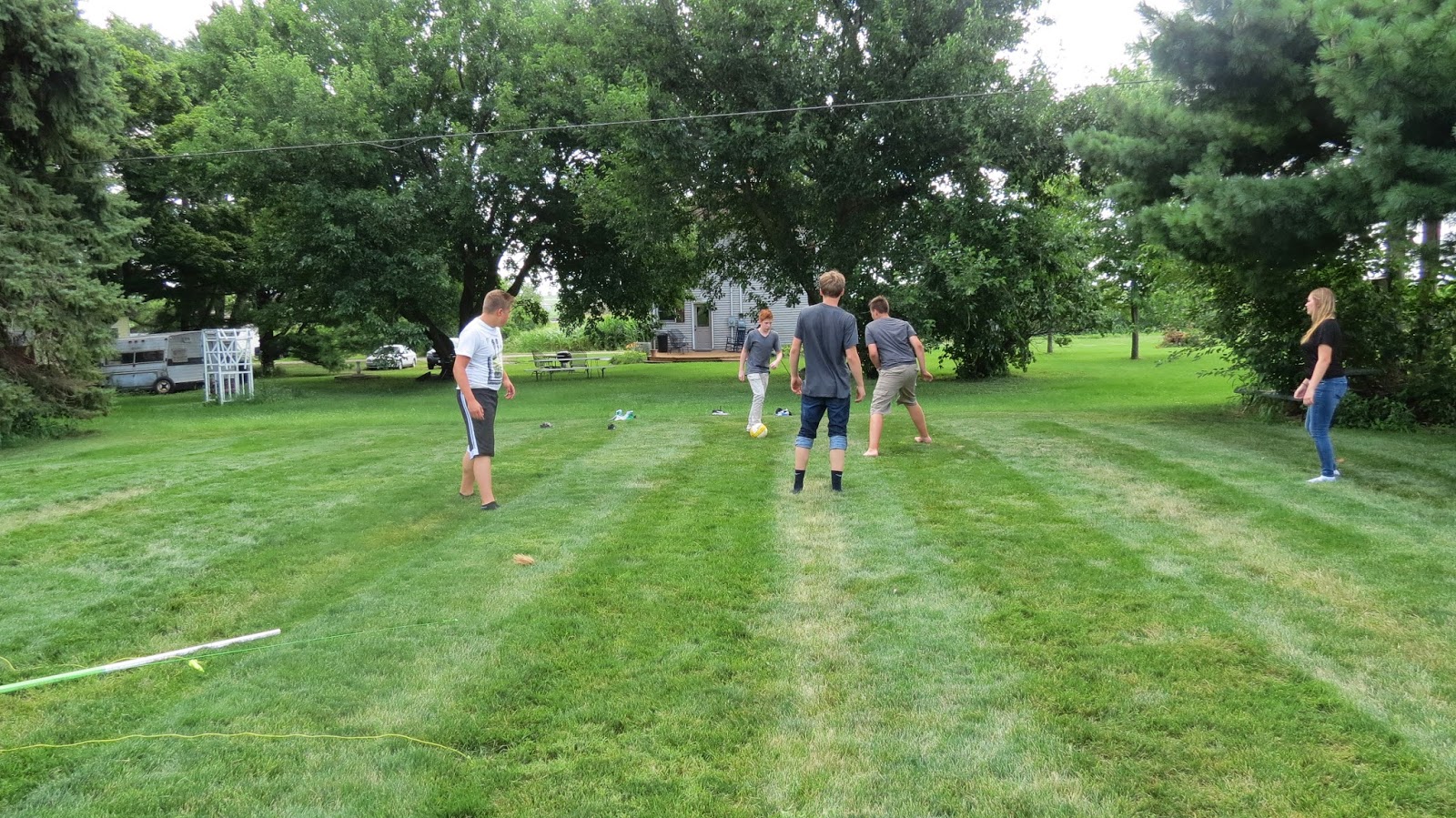 the kids played lots of games throughout the day.  Volleyball and soccer were the longest running games.  The Acres kids loved all the grass.  They don't have grass in Arizona.  When we were first walking into the backyard, one of the girls said, "Do you think they would think I was weird if I laid in the grass and rolled around?"  I said yes, but told her she should do it anyway.  She didn't. 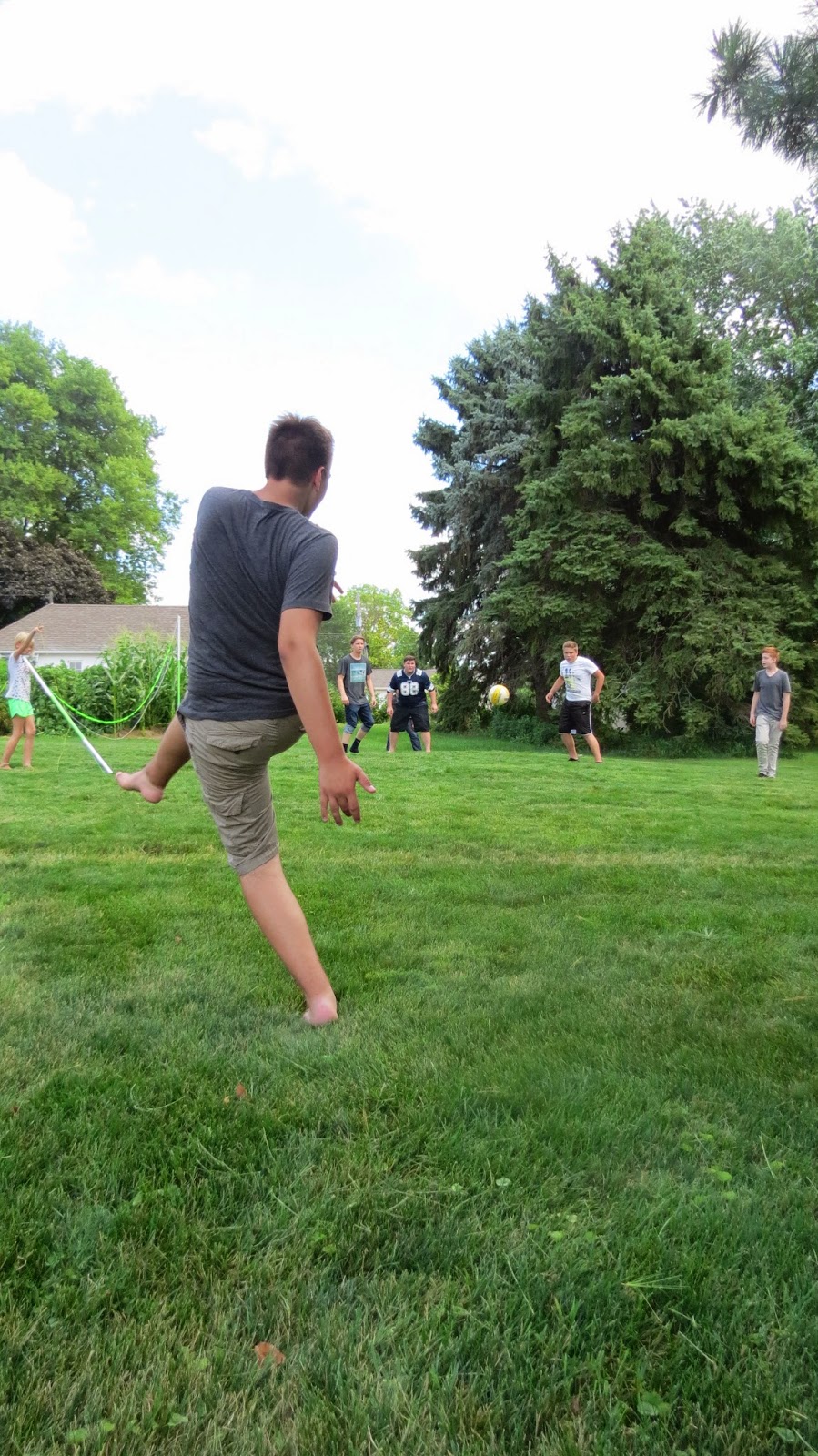 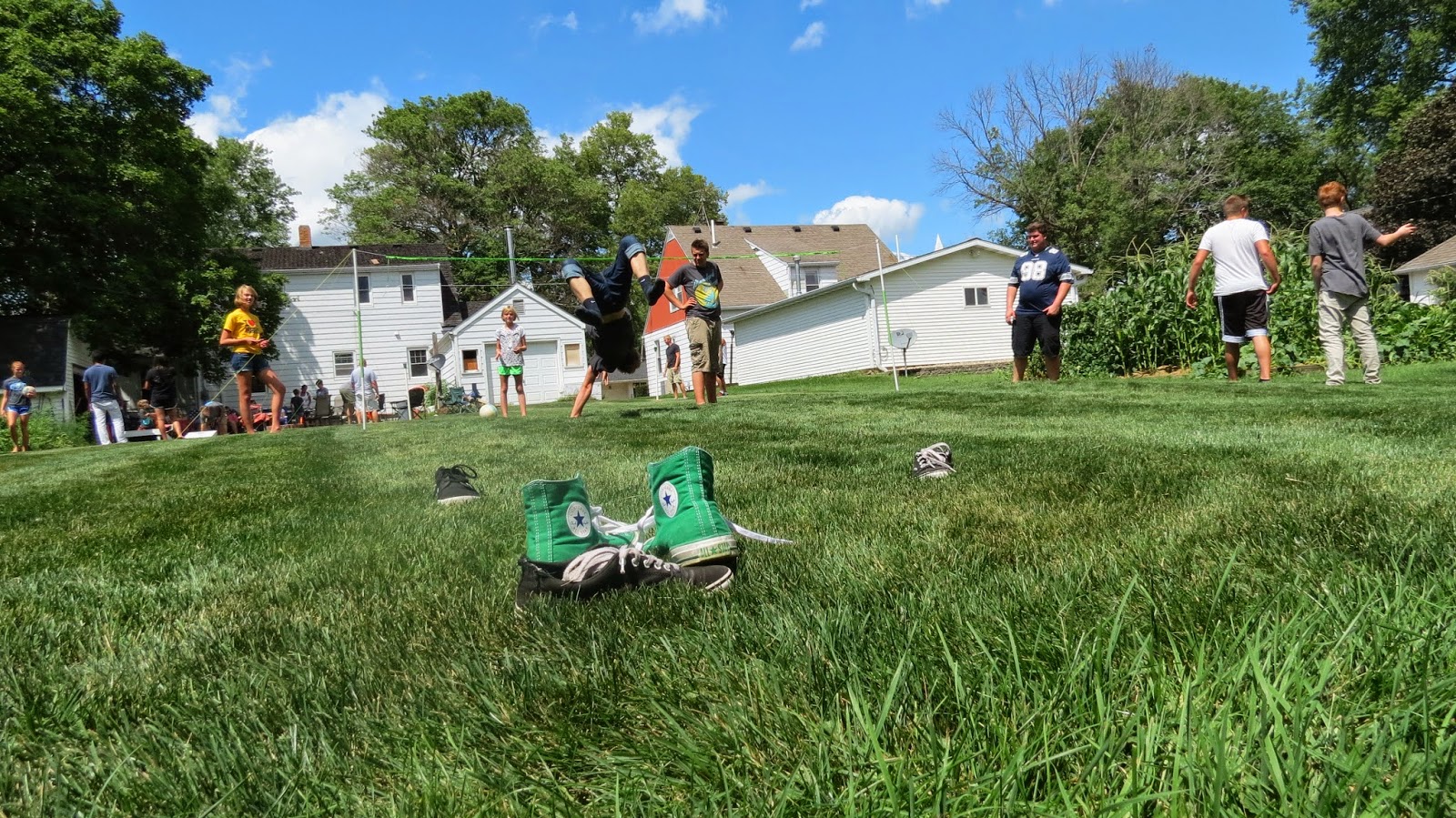 I love the perspective in the above picture.  And that Brianna caught Josh mid-backflip. 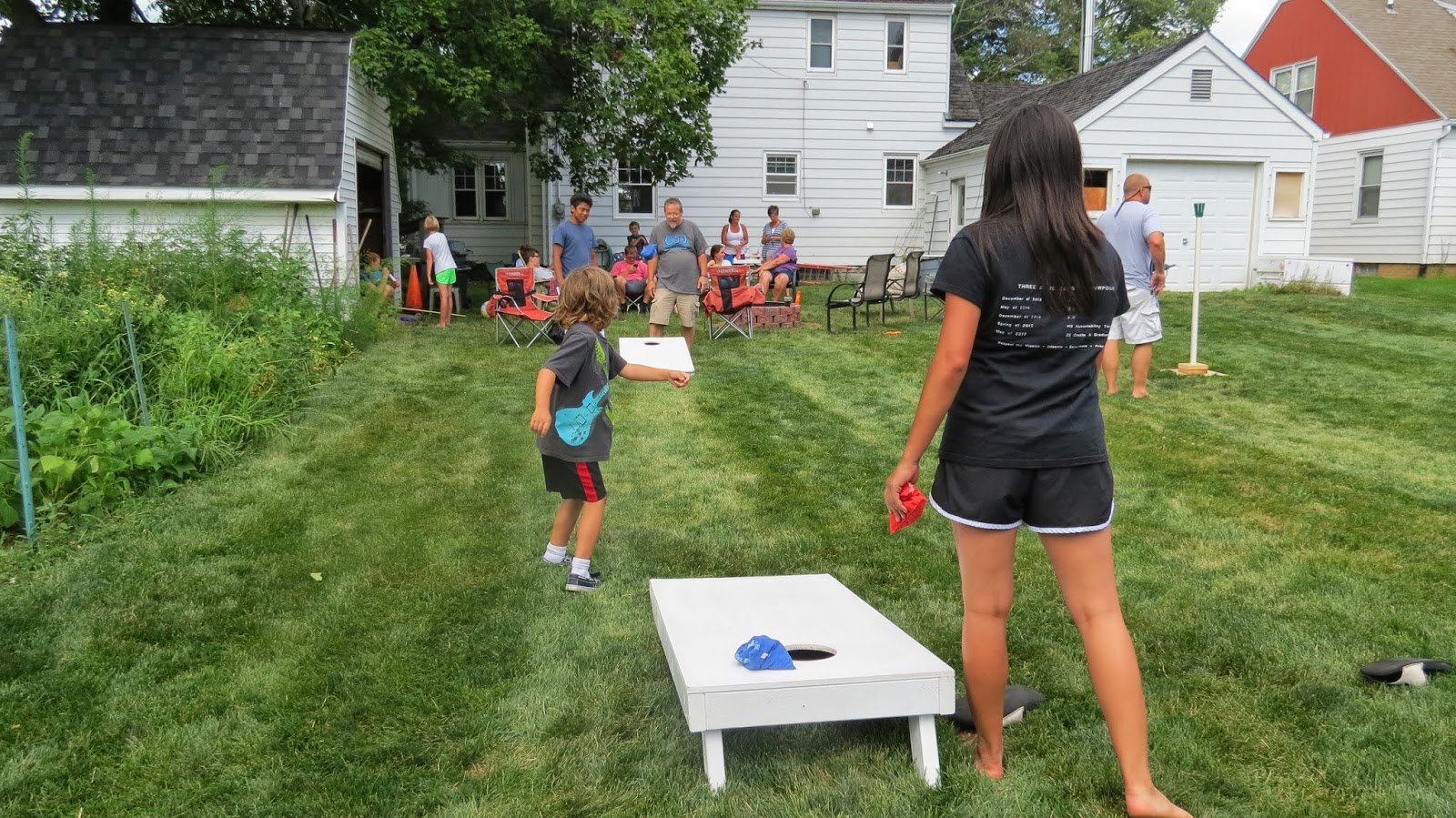 Played some bags (or cornhole, depending on who you're talking to).  Ethan, who is the youngest in the family, held his own really well throughout the day.  He won knock out twice playing against the big kids. 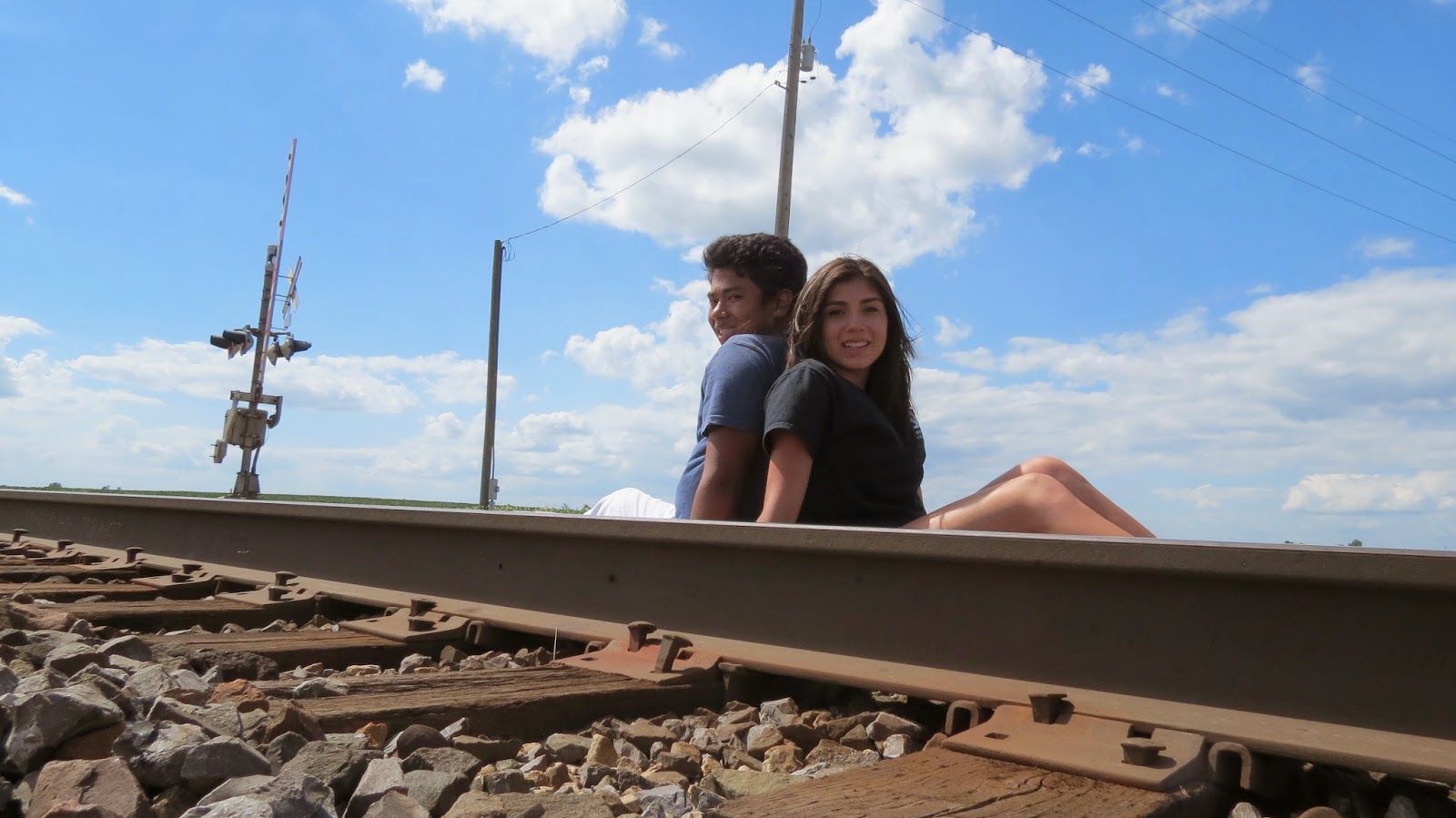 Max, Stephen, and Gemini were fascinated by the trains that would go  by every 15 minutes or so.  They decided to walk down to the tracks.  First they tried to go through the corn.  But as Gemini put it, "I kept hearing lots of things in the corn!"  So, they took the road.  We also enlightened them to the joy of putting a coin on the track for the train to flatten it. 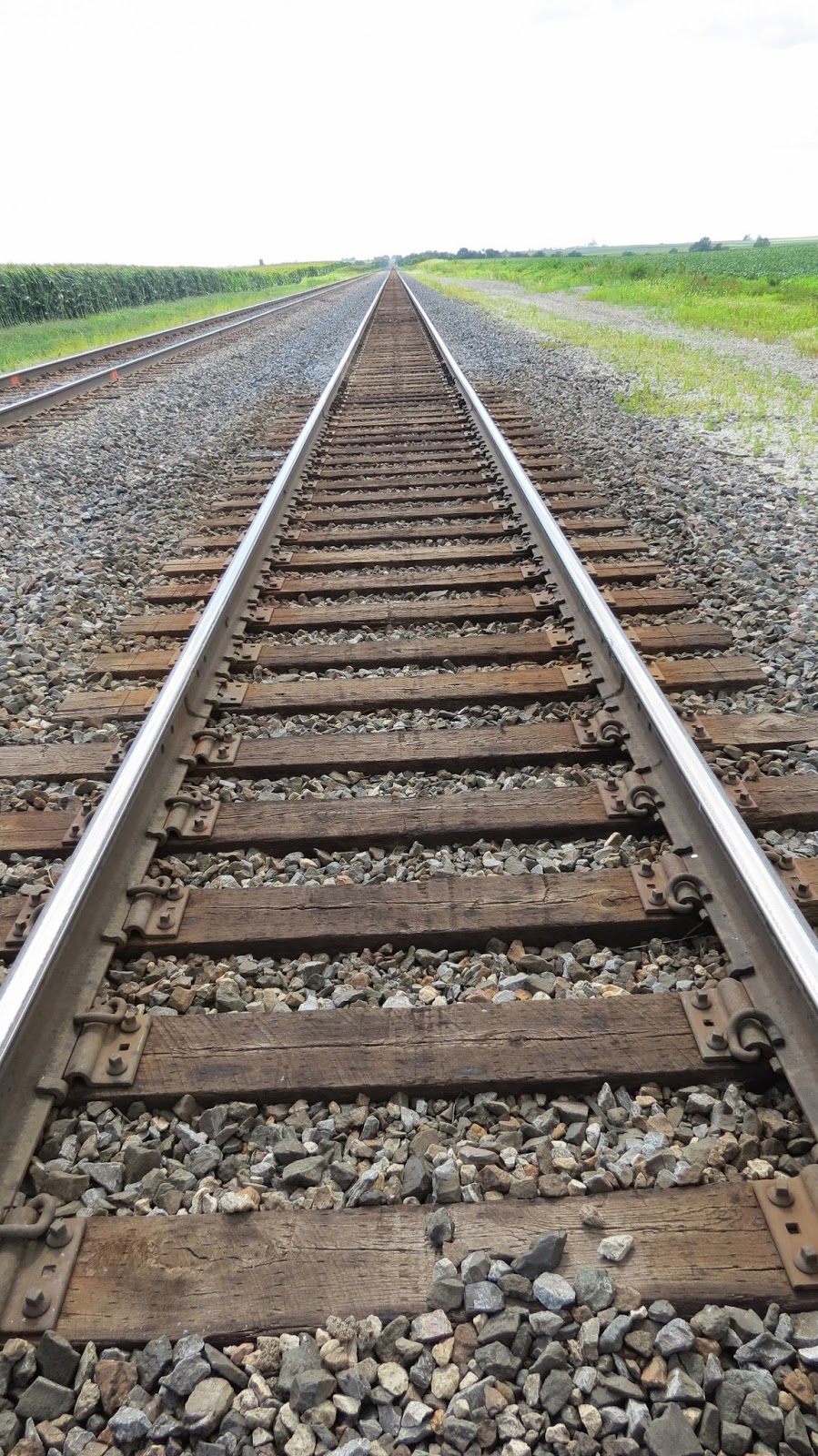 A lonely track through a bunch of corn. 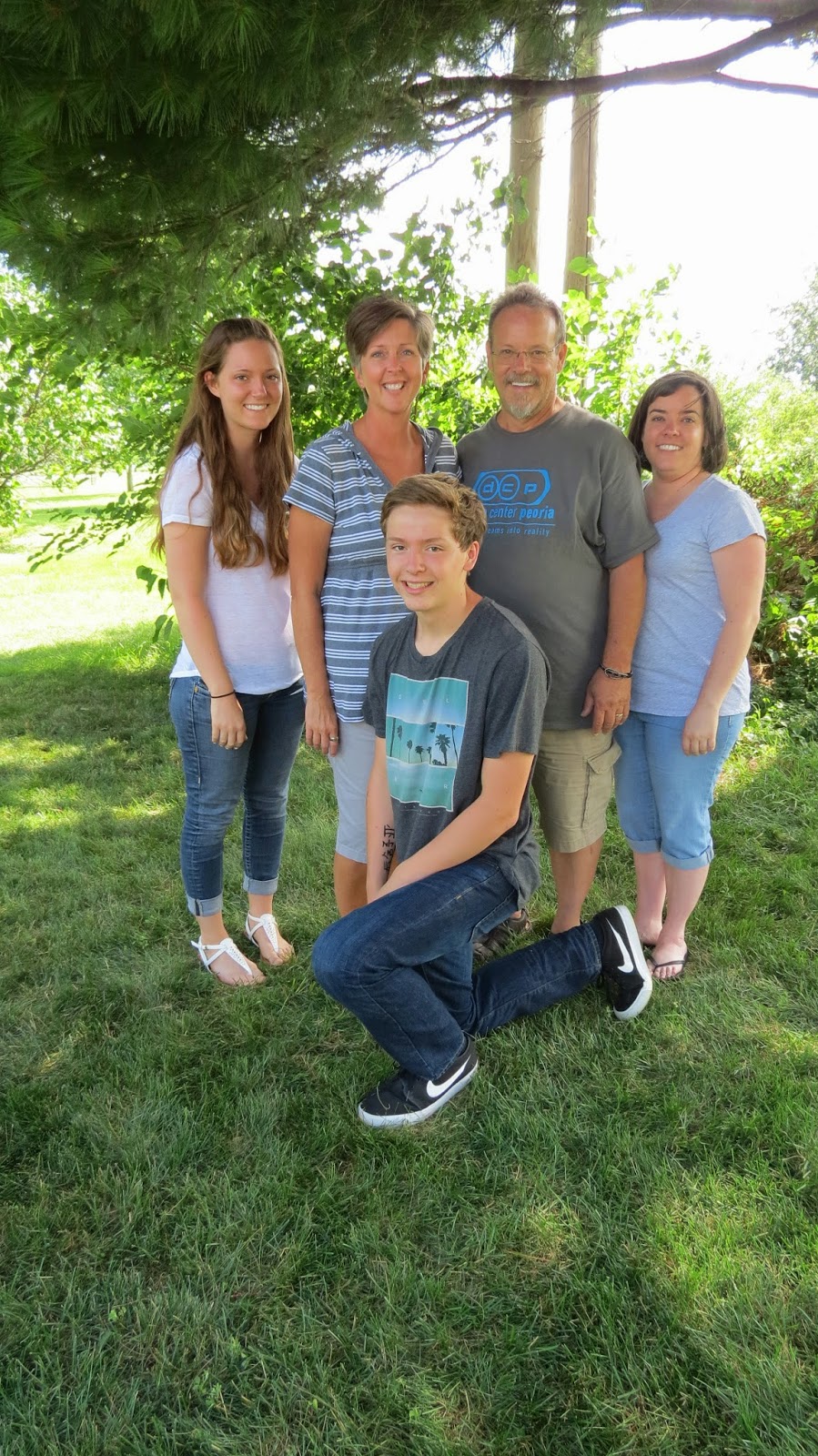 And then we took lots of family pictures for Amy's parents, who were still in Arizona. 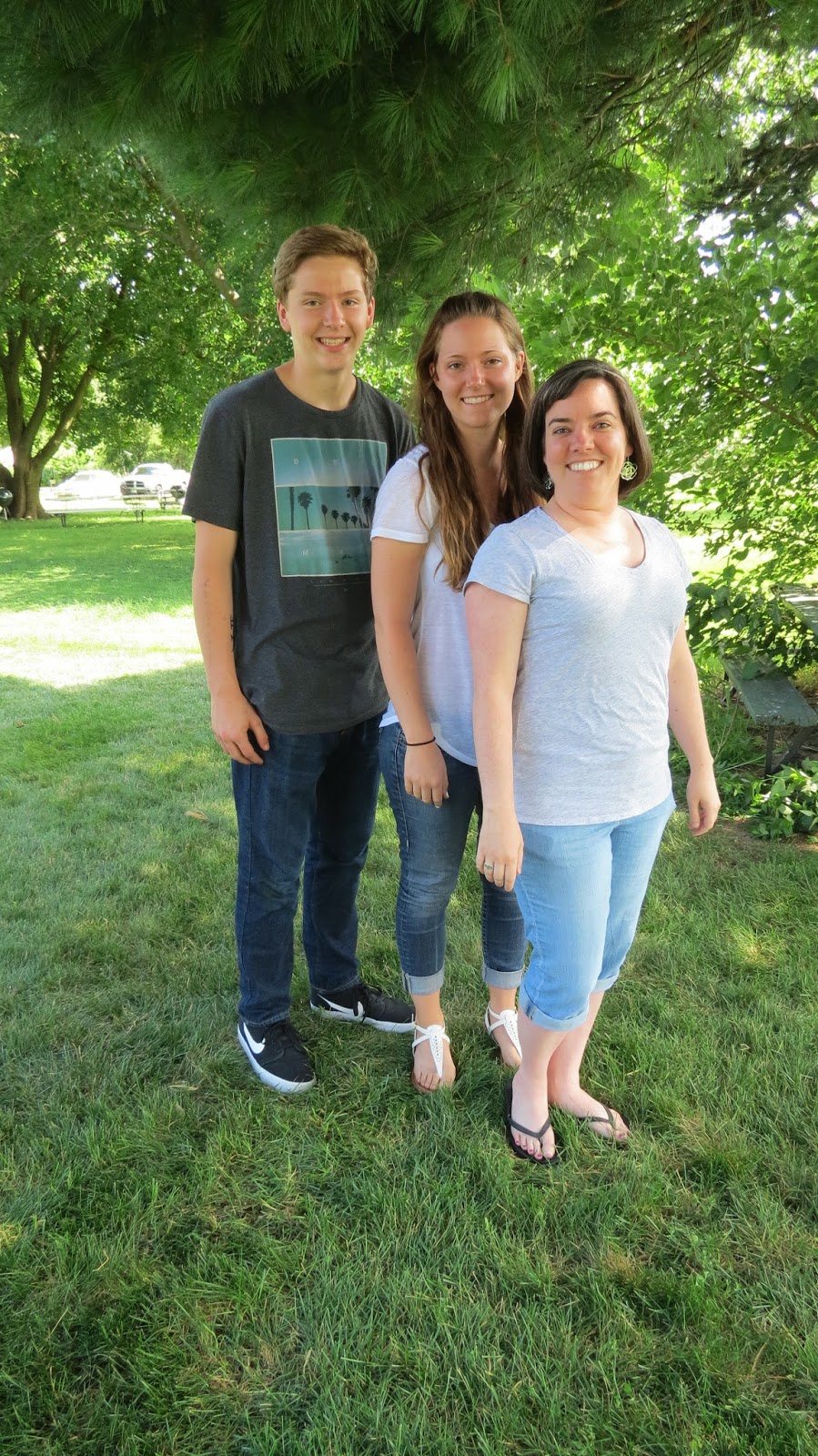 I love this picture of the three of us.  Kim pointed out the fact that we were in order of both height and age, just in reverse order.  So I'm the oldest and the shortest.  Just great! 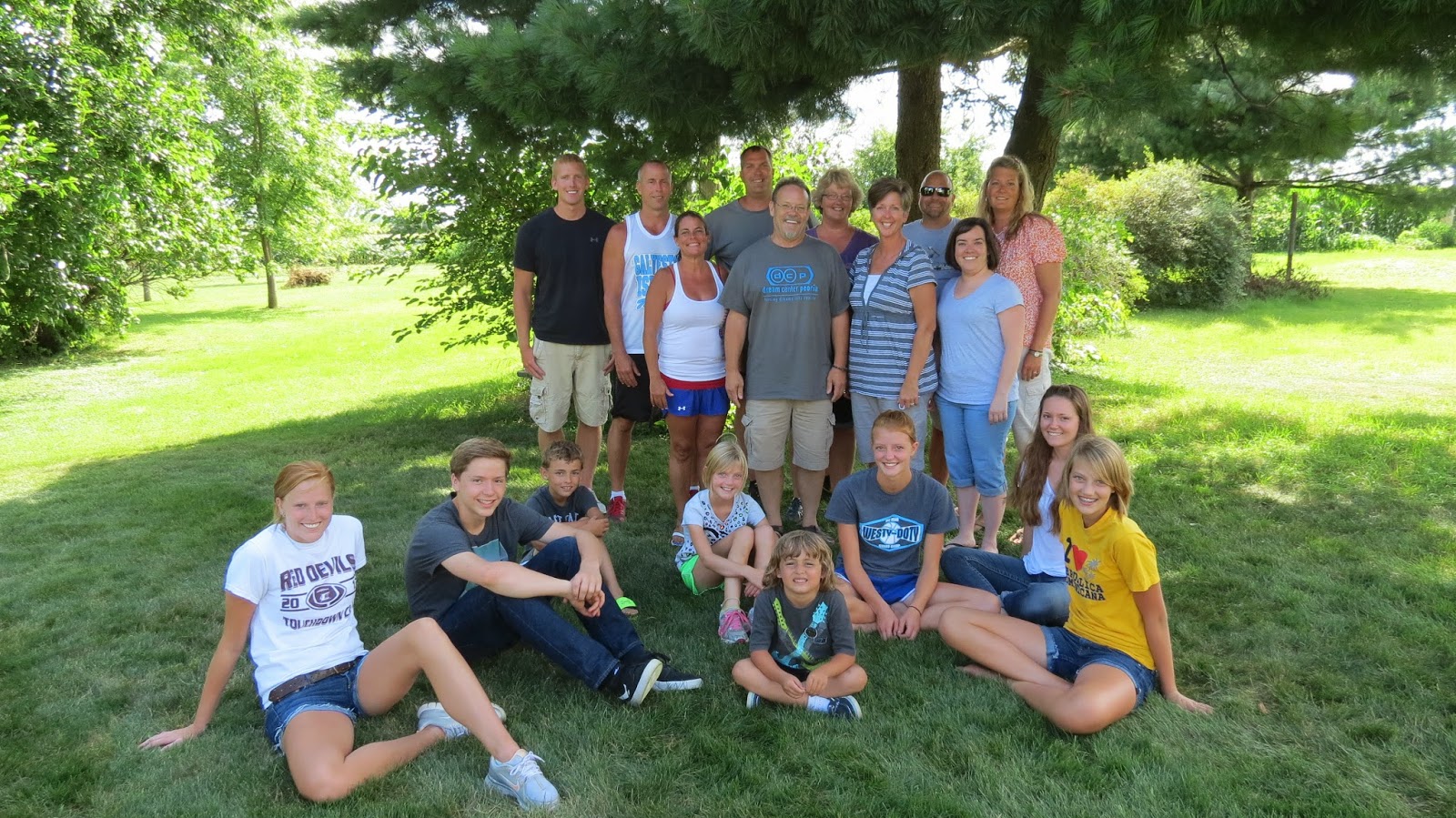 The whole Harms' crew.  Earlier in the day, when we were lining up for food, Amy told the kids to go first.  I asked Josh whether I was a kid or an adult.  He informed me that if I have a parent present, I was a kid.  Yay for me since I was hungry.  But for this picture, I chose to be an adult because I didn't want to sit on the grass for the picture. 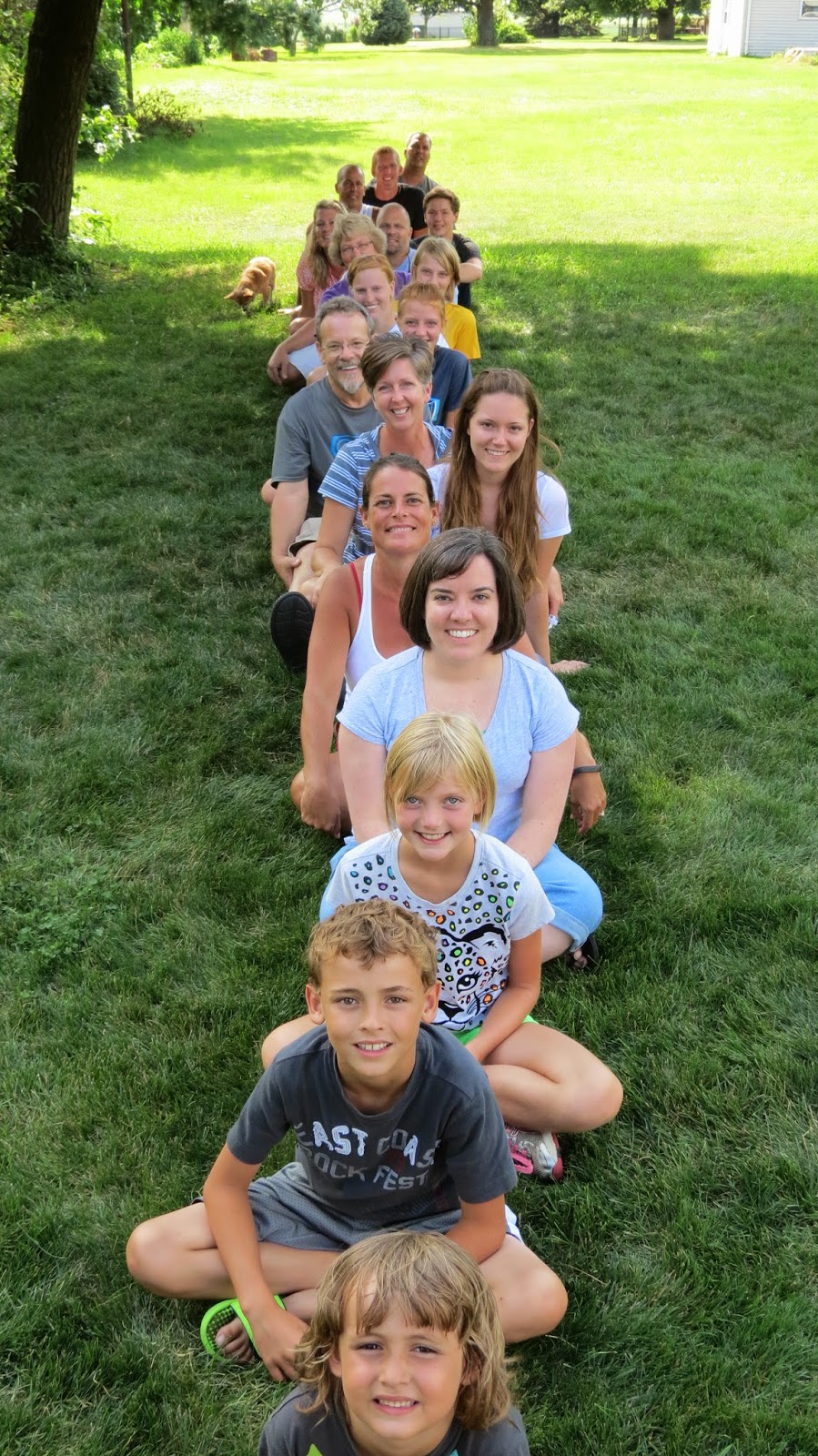 Brianna had us all line up, again in height order.  I tried not to think about the fact that I was fourth in line behind a 7 and 10 year old (and Brooke, but I can't remember how old she is).  It made me feel better that Lou was right behind me and Daynah behind her. 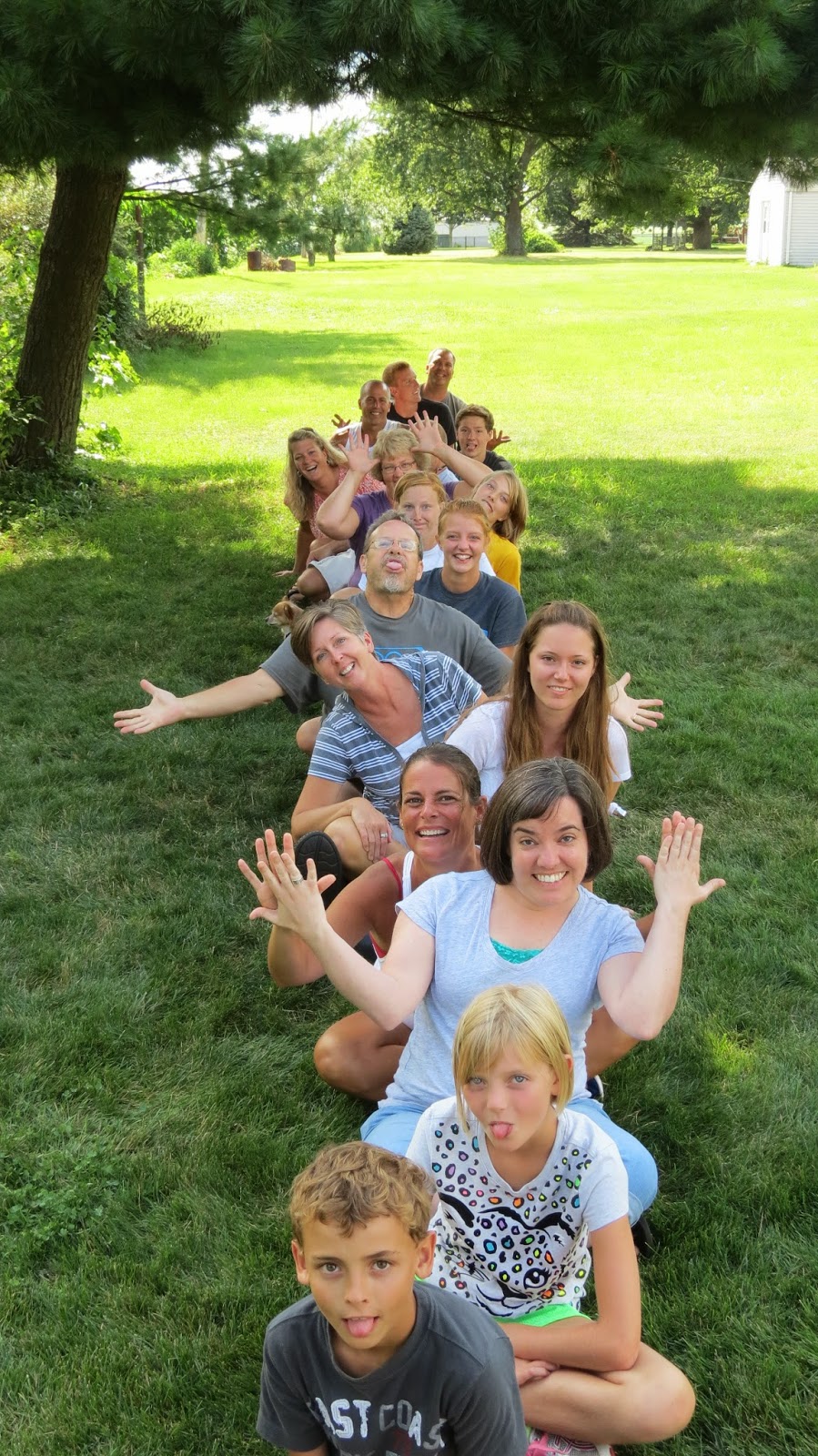 And then we did a funny picture. 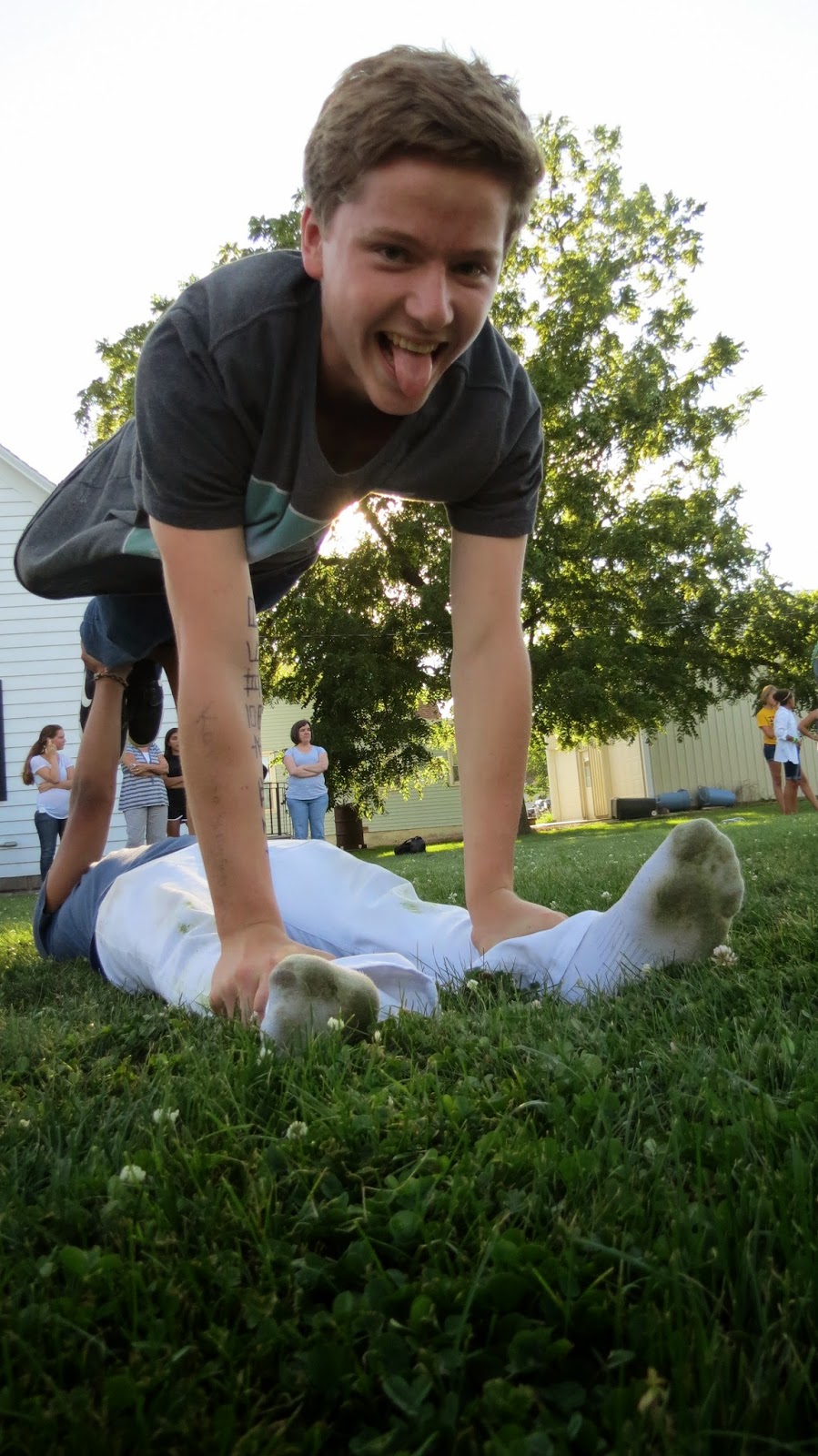 That evening, we attended Sean and Ann's community youth group.  The above picture was taken during group games. 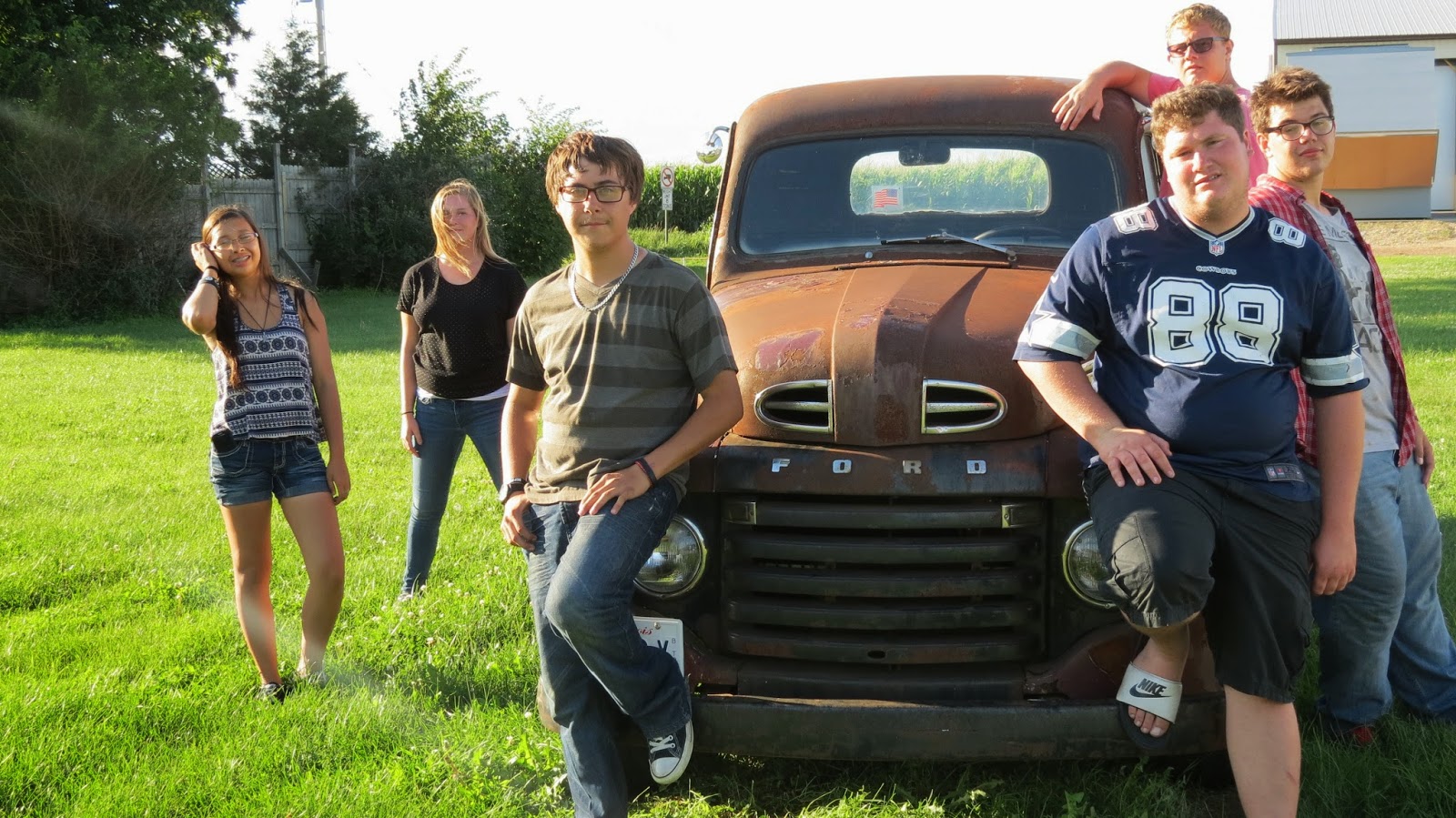 And then Brianna noticed this old car in the field and took some pictures.  This is one of my favorite cards.  It could be an advertisement for Ford!

Thanks for journeying with me through my week with the family participating in Mission Peoria.  I saw my family off on Monday afternoon and then took the afternoon off to recuperate.  And then it was back to the grind on Tuesday!
Posted by Teresa at 10:09:00 PM