You know, as far as predictions go, I think there's a lot to be said for them. For instance, "they" predicted it was going to be the worst winter ever--severely cold and tons of snow. Not so much an accurate prediction from "they." And now "they" (not sure if it is the same "they" or a different "they") are saying that because of the mild winter, this summer is going to be filled with bugs. My first thought was, "Great!" My second thought was, "I'll believe it when I see it." Well, after the roach incident of a couple of weeks ago, this is what I found today: 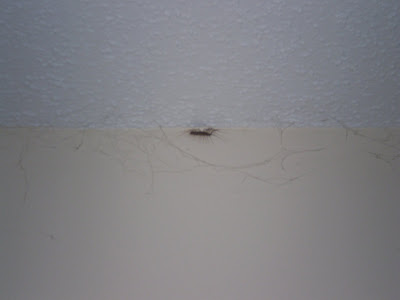 I think it's a gazilipede. I'm a little ashamed of this picture because of all the cobwebs on the wall. But I promise, I can't see them as much from the ground. But guess what. If I can't reach the cobwebs, I can't reach the gazilipede. So, for now it stays, because frankly, it's not in my room, so it doesn't immediately face death. But really, this is the third near death encounter I've had with bugs in the last two days. Yesterday was a death defying trip to and from church. On my way to church, I was minding my own business, when what to my wondering eyes should appear, but a tiny brown spider on the inside of my windshield. I attempted not to panic as it scurried across the windshield. I snuck a kleenex out of my purse and crushed the spider when it came around the corner onto the driver side window. Well, then, on the way home from church, I was again minding my own business, when I looked down and there was a bee in the middle console. I have a thing that closes over the console, so I closed the bee in until I got home, but when I opened it, the bee flew out. I quickly jumped out of the car, but it actually flew to the passenger window, so I just rolled the window down for it to fly away.

So, the moral of this post is this: if these three bugs (four, if you count the roach) are any indication, my prediction is if the bugs are going to be bad this summer, I vote for carrying bug spray on my key chain instead of pepper spray. And I say, bring on winter!

oh seriously, i went to put something in the garage, and some bug flew in my face, so I had to conquer and kill it cause now it's in the house and I"m not sure what it was.
That after that I was convinced I was in for a long battle with bugs for the summer. There have been so many spiders and bugs everywhere...And I saw a bee and it's MARCH!

Haha! Remember Frank...the cockroach that lived in our dorm? You WILL survive. I also smushed 2 spiders inside our car this weekend. AND I think bugspray on a key chain is genius!

I am finding lots of spiders in my apartment all of the sudden. Did you send them to me?