Two years ago we instituted a girls' cousin get together. And it was so much fun, we did it again. Unfortunately, only four of us could make it. There are 11 girls in the family, 8 of which live in Illinois. But, we had one representative from every family unit, minus the New Mexico crew! We met in Geneva at a wine and bread place. The girls were concerned when they realized I was not going to be joining in the wine with them, but I assured them that I knew what I was getting into when we were making suggestions and that the company was more important than the place. And I was right. Although, they were even more concerned when they found out I don't eat cheese! :) But I was a trooper and put on my adventurous spirit and tried a little of just about everything put in front of me (minus the wine and Sara's mushroom meal (because I knew I wouldn't like that)). 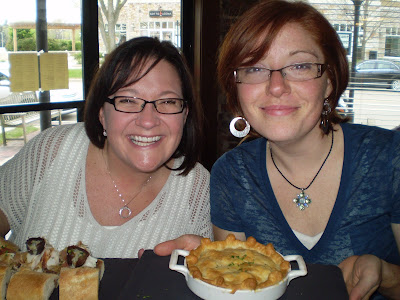 Here is Missie and Sara with their main course. Actually, technically I did try some of Sara's because I ate some of the crust! I never did sample any of Missie's sandwich. 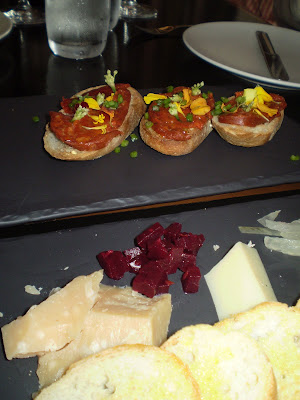 One of the guys that worked there was super helpful in the ordering process. We basically just let him order for us. The lower portion is the cheese tray. The cheeses were European. I think one was sheep, one was goat, and one was cow. The left cheese was my least favorite and the top cheese (which you can't see) was the one I tolerated the most. The white stuff on the right is pickled watermelon rinds to cleanse the palette in between cheeses. It was pretty good. The top tray is salami with honey and some type of flower. It looks kind of gross but was actually pretty good. We all thought eating a flower was kind of weird but we did it in the name of adventure! 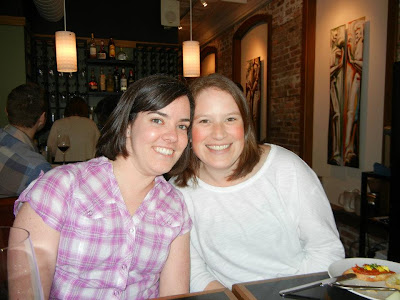 Carin and I. Sometimes it's hard to believe that we were little once and inseparable at family gatherings. Wow. Just typing that brings back so many memories. Like laying in her backyard and taking turns reading pages of books out loud. 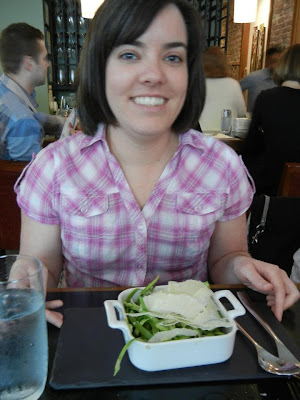 For my main course, I tried the asparagus salad with Parmesan cheese on top. I was actually excited about this because I like asparagus. Unfortunately, it wasn't so good, but sometimes even great adventures flop! I expected salad greens with asparagus, but this was just shredded asparagus in a bowl and not the best tasting asparagus ever. Oh well. The dessert was an apple tart which was amazing. Sara took a semi picture of that. Carin and I were too excited to eat it to wait for her to get her camera ready! 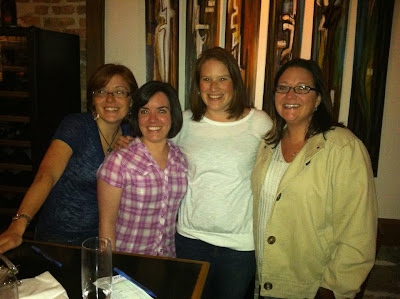 4 1/2 hours later, we asked one of the waiters to take our picture! It was fun to try something new. And it was great to catch up on what is going on in everyone's lives. We talked about lots of girl stuff. And kid stuff. And relationship stuff. And work stuff. And food stuff. And recreation stuff. You can cover a lot in 4 1/2 hours!
Posted by Teresa at 9:29:00 PM