A Year of Anothers

Last year I sent out a Christmas card for the first time in many years. In it I pasted a list of new things that had happened to me in 2010. And there were a lot. Some little things, like joining Facebook :). And some big things like my family moving to Arizona. And some in between things like entering into a new phase of ministry with AWANA. When I was tossing around the idea of sending out cards this year, I tried to make a similar list. But there just wasn't anything to go on it. It felt like a ho-hum kind of year. Not a lot of newness. Just a lot of anothers. So I didn't send the card out. I can't bring myself to send a card that just has my name in it. I have to personalize it :). So, for those who were wondering, that's why you didn't get a card this year. But, for the sake of my blog readers, I figured I could still give you the list of "anothers." I have found the blessing in the anothers. Changes and new things are not always what they are cracked up to be. But settling into the anothers can be dangerous too (I'll save that for another day when I've had more time to process some of the swirling thoughts).

1. Another year at my job. Praise the Lord. In March I will start my 6th year at the Children's Home.
2. Another year in my apartment with Emily. We've talked about moving, but never settle on anything. We've also talked about how we have to meet and marry men at the same time so we don't have to break in new roommates!
3. Another visit to Arizona. I went in October to see Dad, Amy, Daynah, and Josh and spend time with their extended family of 8 boys. With it came a first (see, there were some!)--seeing the Grand Canyon. If I sent out a picture card, this is the picture I decided would have gone on that card: 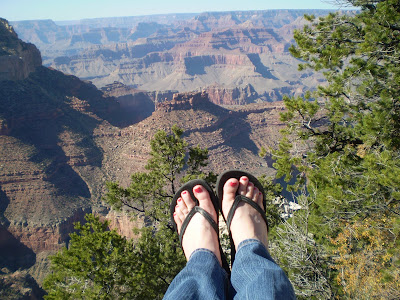 Wouldn't that have been funny. No picture of me, just of my feet! :)
4. Another year in my car. I bought it five years ago yesterday. My second new thing: I paid it off in the spring, which left me debt free!
5. Another birthday :). I know that one goes without saying, but it is still one of the anothers.

2012 will bring some changes. Many of which I don't even know will happen. The first change will come in January/February with the birth of my new nephew. Today's sermon was about including God in making your plans. So, whether it is a another year of anothers or a year full of changes, I pray that I can honor God in the plans that I make!
Posted by Teresa at 1:27:00 PM

Thanks for the "Year of Anothers." You are so special to me! I hope and pray that 2012 will bring you much joy! You really are a special person and I love you.

As usual, your timing is perfect. Last night Chris and I were discussing what to do about moving, since he cannot find a job in IL. We don't want to be "stuck" in GA forever, but having him give up his career is not an option either. After much anxiety, I thought that I should open my mind and heart to try to hear what God's plans for us are. It is such a comfort to let go a little and listen to His wisdom. Thanks for the reminder. :o)