I couldn't decide whether to title this "Big Guns" or "Playing with the Boys." Either way, I now have the song "Playing with the Boys" from Top Gun in my head. You know the scene where they are playing volleyball on the beach. It's the song playing during that scene.   Anyway, I digress.  Chris bought a Nerf gun while I was in Georgia so that he and John could have Nerf gun fights (John already had a gun).  John LOVED this activity.  Although he was a little leery of Aunt Teresa playing because it was "daddy's gun."  So, at first I just took the pictures. 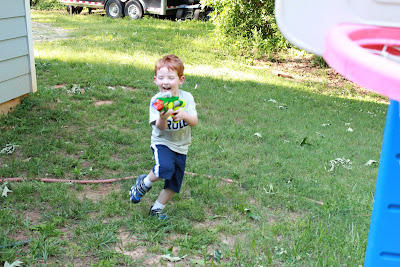 Look at how happy he is to be chasing Daddy and shooting him! 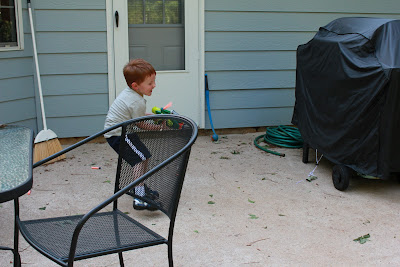 If you look closely in this picture, just above the chair, you can see an orange bullet heading straight for John.  This is why he is moving away! 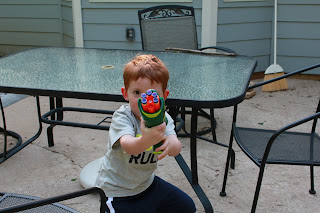 AAAGGGHHHH!  I love that he is wearing a shirt that says "Boys Rule." 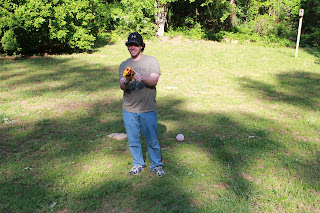 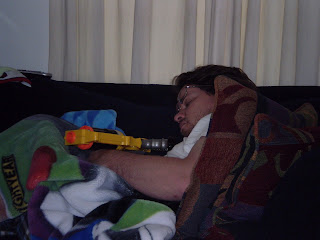 Worn out from all this shooting at each other.  Chris was holding the gun while he rested.  No sneak attack on this guy! 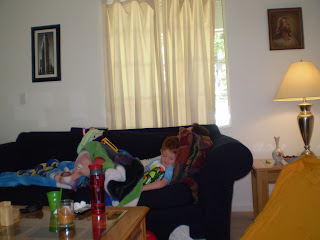 John is also pretending to sleep.  Notice the smile. 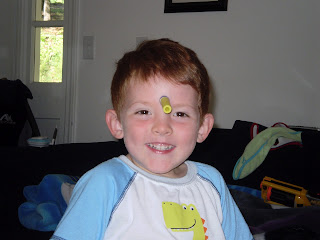 Hey, John,  I think you have something on your forehead! 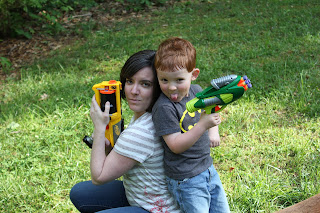 And finally I got my hands on one of those guns!  In reality, Nerf fighting is only so-so.  It really means about 5 seconds of shooting and 10 minutes of looking for bullets all around the yard.  And John has an unfair disadvantage.  He has to run to the table to cock his gun each time because he is not quite strong enough to pull it back on his own yet.  So, you have to go slow with shooting your own gun so that he doesn't get hit 6 times before he gets to fire twice!  But he doesn't seem to care, no matter how fast you shoot him.  I especially love this picture, because Chris told him to look mean! :)
Posted by Teresa at 10:24:00 PM