The boy who loves his brother

I actually did not get very many pictures of John and Michael together.  But this one I love: 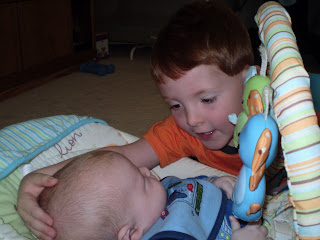 This is actually not even nearly as close as John gets to Michael.  He has a "special" way to talk to Michael that involves getting as close as possible, talking really loudly through clenched teeth, and rubbing his head.  But Michael doesn't seem to care! 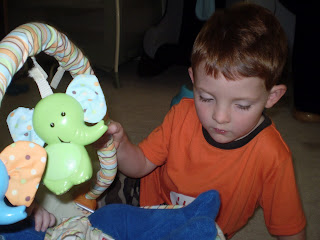 And this one I love because John was rocking Michael in his bouncy seat because Michael was a little fussy.  Just part of the day's work when you're the older brother, I guess.
Posted by Teresa at 4:27:00 PM