A Wonderful Time Was Had By All

At least I think so! :) This weekend was the Career Impact trip to Cedar Point in Ohio. We started out Friday night on our 4 hour drive to Peter's house. His family was nice enough to host him and about 20 of his closest friends for the weekend! They were amazing to have us crash at their house and eat their food and use their showers/toilets! We even had fresh towels each morning! We then woke super early Saturday morning for the 4 hour ride to Cedar Point. It was a beautiful day filled with LOTS of fellowship and roller coaster riding and walking! The temp was about 75 and sunny! Surprisingly the park was not very busy at all. The longest we had to wait for a coaster was 1 hour, but most rides were only a 1/2 hour wait or less. Here is the group before we rode our first roller coaster: 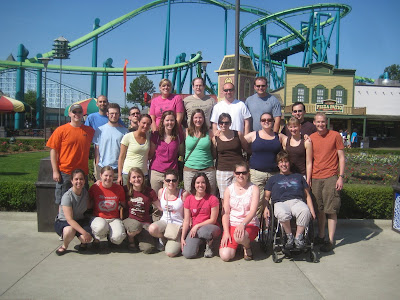 The ride behind us is the Raptor, which is very similar to the Batman at Six Flags. Peter would argue with me that it is completely different because Cedar Point is independently owned and has no affiliation with Six Flags, but I call them like I see them. Dangling legs with the track above you=almost the same as the Batman. 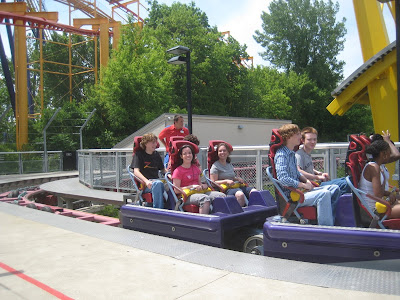 Emily and I survived the 120mph take-off on the Top-thrill Dragster. The guys behind us and in front of us spent their time in line discussing which color dragster we were going to get to ride in. They thought (by much calculation and discussing) that it was going to be the gold car. They were wrong...it was the purple car. Sorry guys! 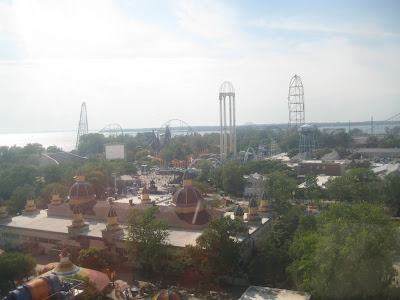 Here is a view from the space needle in the park. It turns out the park is surrounded by Lake Erie. From the tops of some of the hills on the roller coasters you could get an excellent view before plummeting to your death...I mean the bottom of the hill. :) The roller coaster on the left, the Millennium Force, was the first roller coaster we rode. It was quite the ride! The second tall coaster was the Power Tower...see more about that below. The third tall coaster was the Dragster mentioned above...again, 120 mph up one way and down the other. 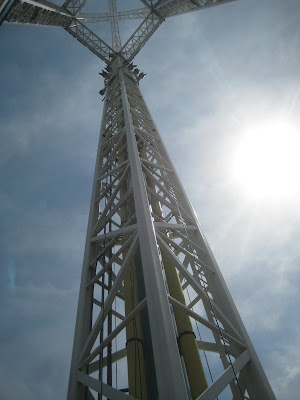 This is a close-up of the Power Tower. This ride is fascinating because it combined the Superman in St. Louis and the Superman in Texas. There were four towers. As you were going through the line, you chose whether you wanted to go up fast and down slow, or up slow and down fast. I chose to go up slow and down fast. Some people did both because the line wasn't very long, but I was satisfied with one ride.
Other stories from the day: I got pooped on by a bird. Yes, you read that correctly. And when I say pooped on I mean slaughtered. Arm, right thigh, left leg almost the length of my capris. YUCKY! I was just thankful that it didn't hit my hair!
I opted out of the fun for the evening and instead took a nap in the van. I was sad because there were a couple of rides I still wanted to ride, but I was starting to not feel well. One of the rides I wanted to ride again was the Maverick. Some of my friends rode it last and got stuck in the middle of the ride inside a dark tunnel. They finally had to climb down a ladder out of the ride. Honestly, I'm sad that I missed that excitement.
We left the park around 8pm and drove the 4 hours home. Sunday morning we got up at a semi-leisurely pace. We had brunch, hung out in the barn on the rope swing, and took a tour of Peter's parents' and grandparents' farms. 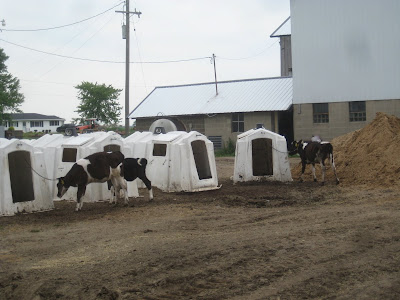 These are the calves (duh!). Peter let me "play" with them. That involved coaxing them out of their houses to pet them. One of them even sucked on my hand. They were so cute! Peter told me that they wouldn't remember me, but I think he's wrong! 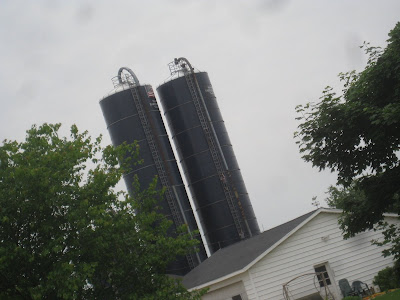 One of the things that I learned we could do too late was climb the silos. I would have totally gone up, but one of our vans had to leave early and I was riding in that van. Bummer! Maybe next time. If you look carefully, there's someone half-way up the ladder. Peter's mom said that they sometimes climb up the silo to watch fireworks because you can see them in a lot of different directions.
Peter also lives in Amish country, so in the morning while I was sitting on the front porch swing I saw several horse and buggies pass by. The clip clop of the hooves was an enchanting sound.
Then it was four hours home. We pulled into the church parking lot around 2:45, the choir people changed, and we rode over to Living Hope (a sister church of Bethany) for their dedication. I went with them to provide child care for the church so that the members could all attend the service. Then I was able to go home and SLEEP! Up bright and early this morning for work. And luckily I only have a 3 day work week because Thursday I leave for TEXAS. HOORAY!
Posted by Teresa at 6:47:00 PM

Looks like LOTS of fun. I'm surprised you did not bring a calf home!