I didn't take a lot of pictures while I was in Arizona because I was busy enjoying life.  So here are is a very random collection of the pictures I did take. 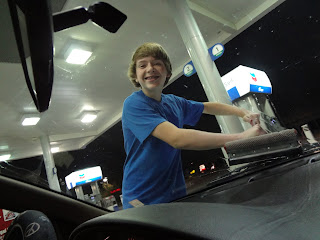 The first night I was there, I went on a late night Walmart run with Daynah and Josh.  This late night run (it probably wasn't that late, but remember at this point I was 2 hours ahead of them, so it was about midnight to me) also included a stop to get gas.  Josh, being a great brother, pumped the gas and washed the windows.  Do you think I could get him to move back to Illinois so he will continue to do this for me?  In the bottom picture, Daynah is pointing out a spot that he missed.  I was laughing really hard (again...remember my lack of sleep). 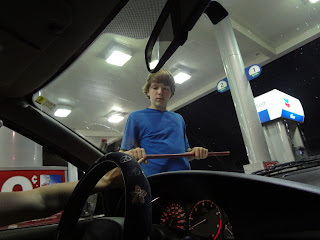 ﻿﻿
After the movie we went to, while we were waiting for everyone to take a bathroom break, I took these pictures of most of the boys.  It cracked me up because I started with a picture of Josh, and then the rest of the boys just lined up to get their picture taken as well.  It was also funny because I think the pictures capture their personalities so well.﻿﻿ 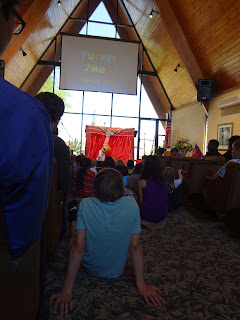 At chapel on Sunday, a group from the community came to do a puppet show for the kids at the Acres.  They let all the kids ages 10 and under come sit up front.  We were cracking up, because all of a sudden we noticed that Josh had gotten out of his seat and sat on the floor so that he could see better.  And yes, I took a picture of it during church.  And climbed over Amy and Daynah to get the picture because Daynah wouldn't take it for me! :)
Posted by Teresa at 1:25:00 PM