Living vicariously through someone else's pictures

My mom was just in Georgia for a week for Easter, so my sister-in-law started putting pictures on Facebook. She had captions for many of the pictures but not for this one. 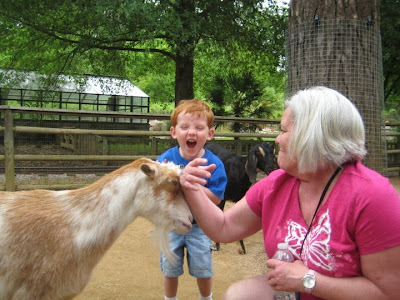 So, I commented and said that it was definitely in need of a caption because I wanted to know what was going on. I mean, I don't think you can capture a picture of someone laughing much harder than this! Ann commented back and said that John thought it was hilarious because the goat was rubbing on Grandma's arm like he was a cat. :) It is by far my favorite picture. I just wish I had video to go with it.
Posted by Teresa at 6:40:00 PM

We tried to get a video of this, but of course the goat stopped doing it as soon as we got the camera ready. There are some videos of the petting zoo though. I'll ask Chris to post them if they came out good. :)

I just looked at the videos of the petting zoo and they are all of Teresa's feet! LOL She must have thought she was taking still pictures, and didn't realize the camera was recording while she was walking around. Oh well! :)

Ha! I was going to say the same thing. Your Aunt Teresa took all the videos of feet. You can hear us talking but that is it. We must give her better lessons. She forgot to turn the video off. It was too funny!